It should have been the day to leave Turkey, but this country is too beautiful to let go. Like every day we wanted to wake up at 7, breakfast at 8, be on the road at 9. And obviously it’s not happening, we left Kars at 11:00. We drove through the city, saw the castle, acknowledged that it is indeed a beautiful Russian designed town with a lot of 19th century European houses. But we chose to dedicate our time to Ani, a ghost town right on the border with Armenia, 45km east of Kars. The half hour drive is scenical, and when we arrived at the village right before the ancient site, we could witness a wild horse domestication scene. Local men caught the the horses, put bridle on them and then tried to ride on them (video here). What a show, while we had our morning coffee from our mobile bar and restaurant. 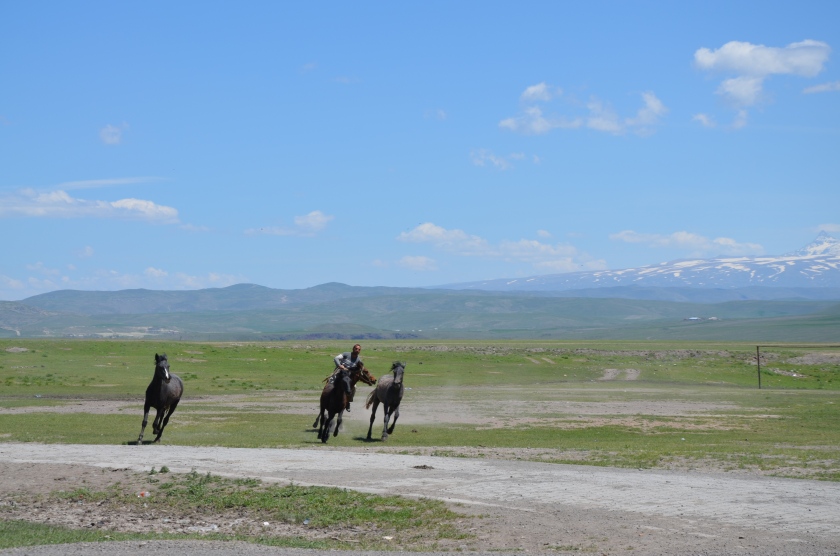 Once the horses were domesticated for the day, our attention shifted to the city. Or better, the few ruins that are still standing of what was once the counterpart of Constantinople in the east. The city was destroyed by invaders and earthquakes, and today only a few ruins of churches, a mosque, a hammam, walls and gates and the caste remain. The rest is a huge plain, littered with stones and occasional pieces of buildings (video here). While you walk from ruin to ruin you start realising how extended the area is and therefore how big the city must have been. And judging from size and decoration of what is left of the religious buildings, it must have been a rich, powerful and culturally mixed city on the Silk Road. It feels really strange to pass through this place, your fantasy works at full speed to imagine what it might have looked like a thousand years ago. And to realize how perishable such a civilised place can be. 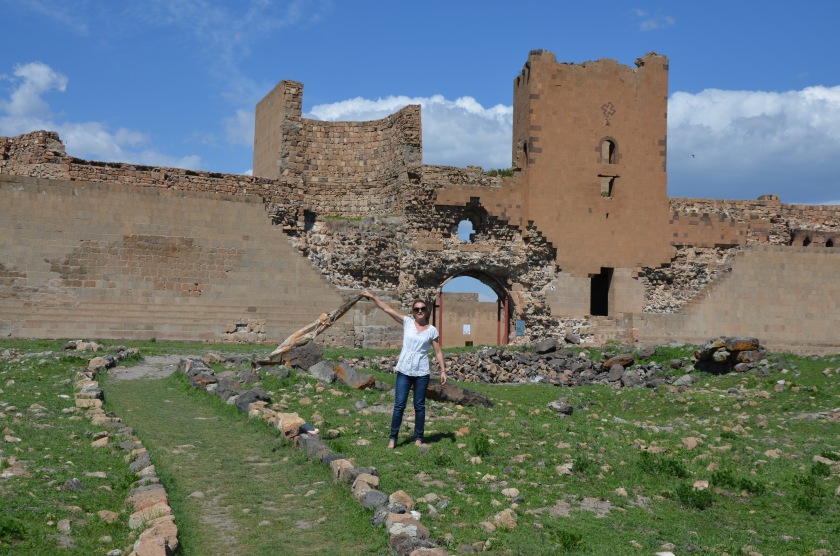 At one of the churches we ran into Mr. Shota Elisashvili, a very friendly Georgian mountain guide that started to explain us that the most beautiful Georgian ruins of churches and castles are in Turkey. Talking about Georgia, Russia, and the perception of the Russians among many Georgians today, he said something that we took note of:

“I’m worried about Georgian people with false patriotism. If you have population like that in one country you will never have future. It is important to acknowledge objectively what was good and what bad. And then you may have future.”
While he referred to a specific context, we agree that this statement is true for many people in many countries. 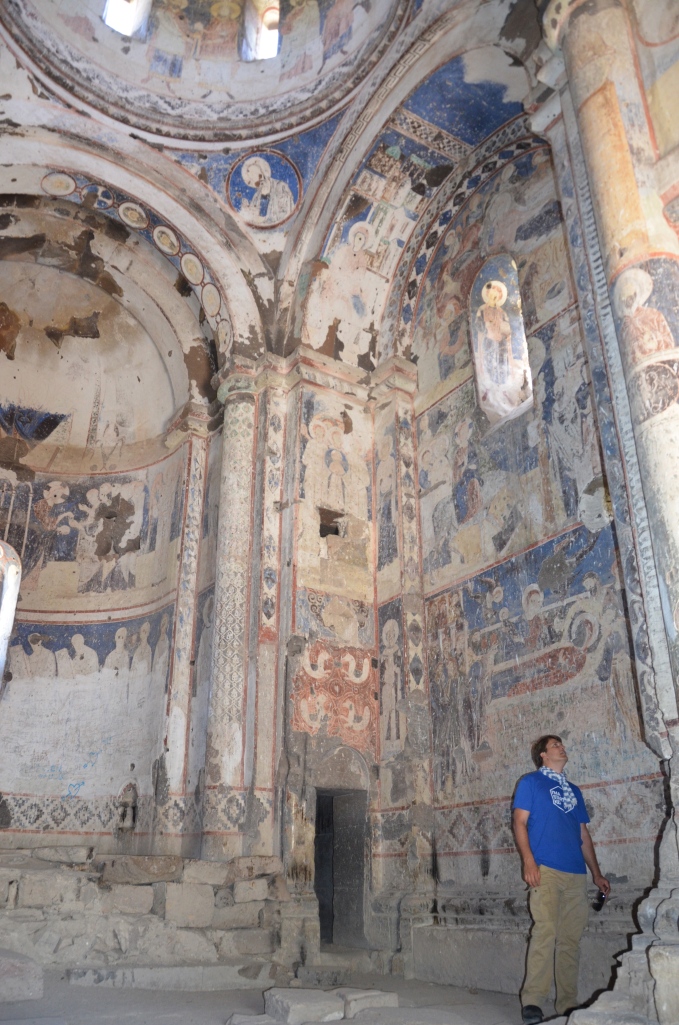 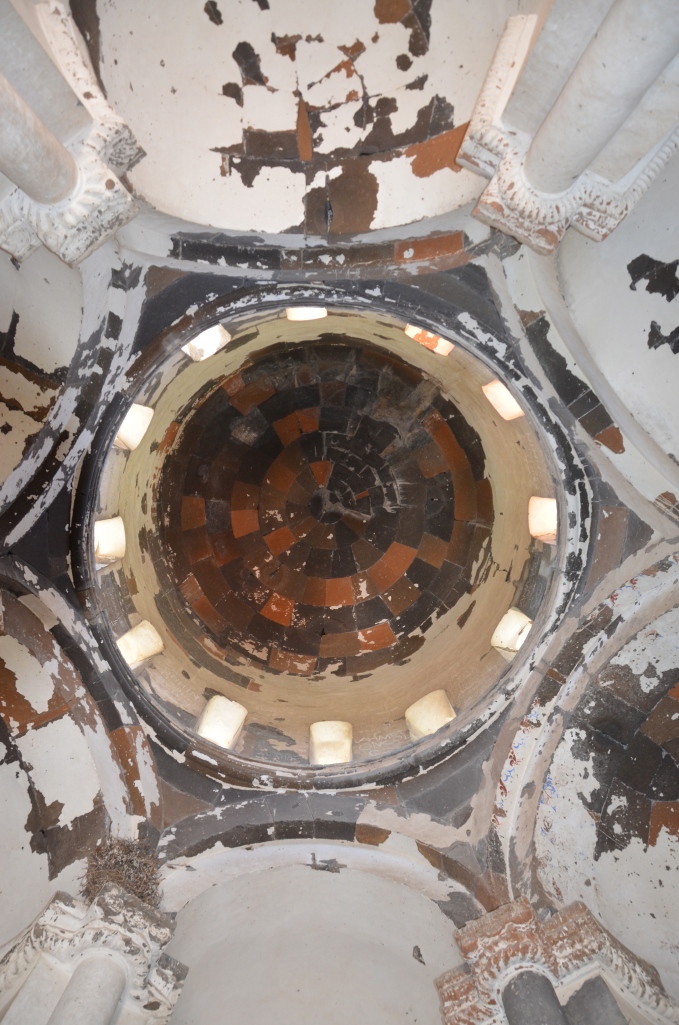 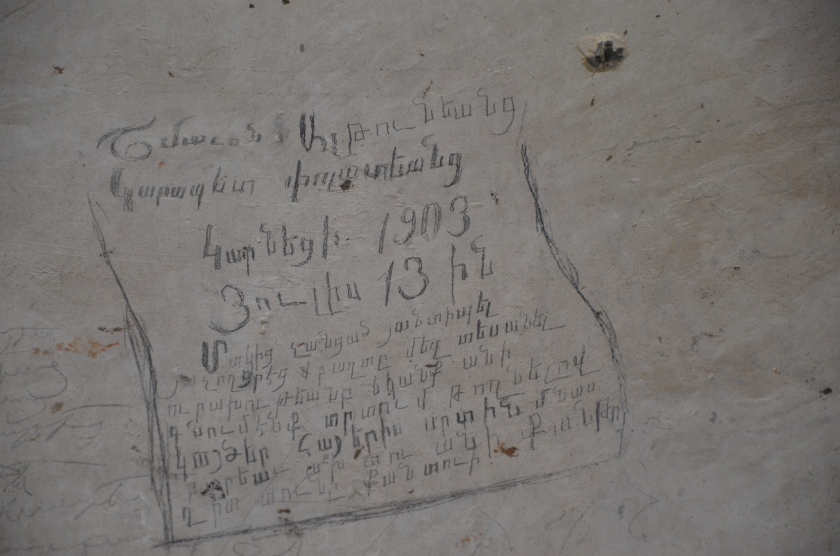 Back at the car park, we checked our maps and found that instead of just taking the quickest road through Turkey to the border, we should take a detour through what revealed to be fantastic mountain ranges. Up to 2300m high and incredibly scenic. We’ve seen several mountains during this trip so far, and these are of the most beautiful ones. Wild horses running around, cattle and donkeys are everywhere.
As the sun started its decline, we finally arrived to a river that converted into a lake. Silver-grey water and grey rocks surrounding it. There is a peninsula on this lake, and on it we found – a camping site!!! We were soooo happy. The tent was up in no time, the bottle of white wine open, while a family of five shepherd dogs including three puppies followed every move we made. When the night fell the “grilled fish” (that revealed to be fried) was ready. And after this tasty finale we’re ready to say goodbye to this great day. Tomorrow we’ll try again to get into Georgia. We’re in no rush.
—
Trip data (Day/Total)

One thought on “Georgia Must Wait”