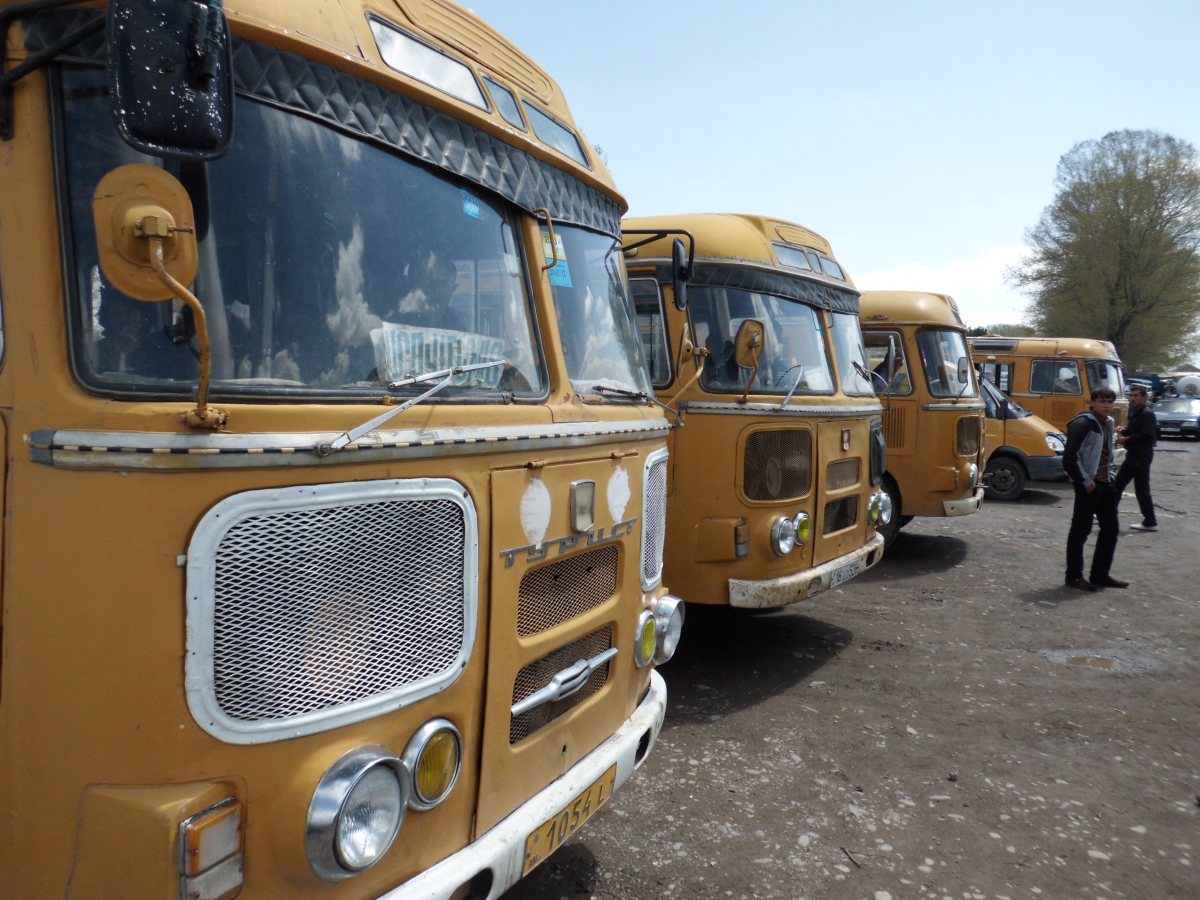 On the road we’re avoiding potholes, this morning around our camping site we had to do the same but with cow dung. The day started at around 06:00 and we remembered the cows looking at us last night with great astonishment as we occupied their territory. We had a cold shower with water from the river, and it was freeeezing cold and no sunshine yet. Not easy, but two coffees and some exercise (all day long on bumpy roads in a car seat takes a toll on our backs) and by 08:48 we were on the road. The early bird effect is really great, until 10 or 11 the day is different, fewer people are around and we had just more hours to move on. The first hour was all up the mountain, mud track, pothole to pothole. Then we approached Lake Sevan, filled up with diesel and food and continued along the western shore of the lake.

At some point we stopped on a local market, hoping to find cheese and bread. Instead we found cattle, trees, bricks, clothes, rabbits, and fish and crabs from the lake (video here). The market drew quite some crowd, we had to fight for parking space. 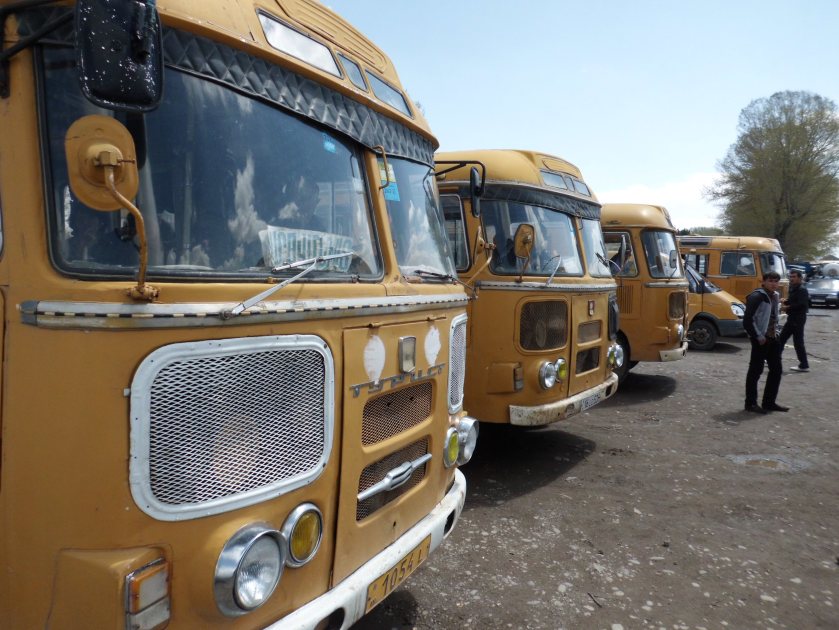 Hill after hill, one curiosity after the other, we reached Sevan and left the lake to reach Dilijan. LP hails it as the Switzerland of Georgia? Dear Lonelyplanet staff: please visit Switzerland again before you publish the next edition of the local guide. There are no grey concrete buildings, no empty squares, no dead towns there. We wanted to eat something, we found zero open restaurants or cafeterias or kebab shacks, although we crossed the town twice.

Ironically the only inspiring place was the bus station. While I waited for Helena coming back from the toilet, I admired the big empty waiting hall, its two counters, the desolate courtyard with a concrete fountain and tow colonnades surrounding it. At some point in my imagination I saw guys building up a DJ console at the opposite wall of the counters, that got converted into two beer and cocktail bars; the windows to the street were closed with heavy curtains, while the ones to the garden had a backstage exit; the fountain in the garden was filled with water, cheap deck chairs appeared around it while a young crowd had drinks to the music inside. Suddenly I was in East Berlin in the nineties! This place was made to party hard!! (For the guys reading this in Corso Buenos Aires, Milano: imagine last summer party’s spontaneous after hours.) 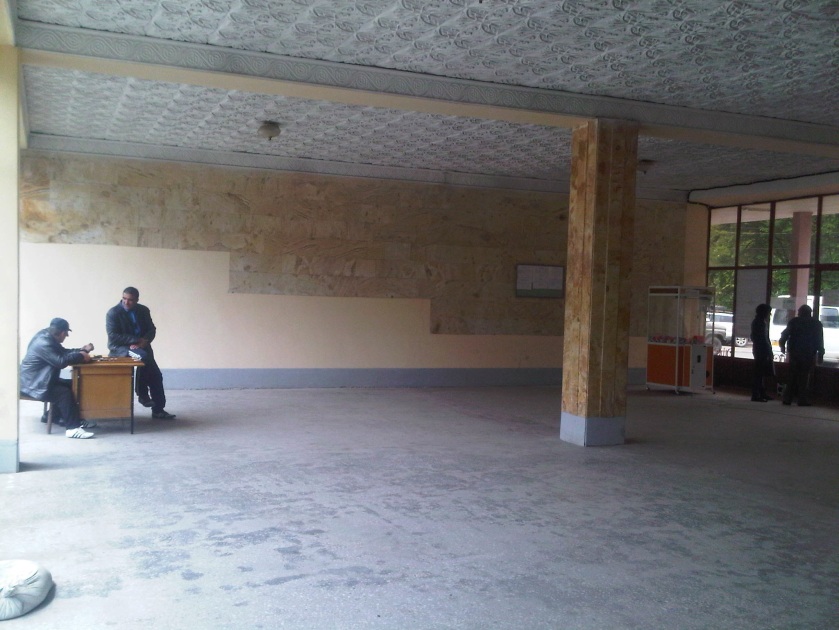 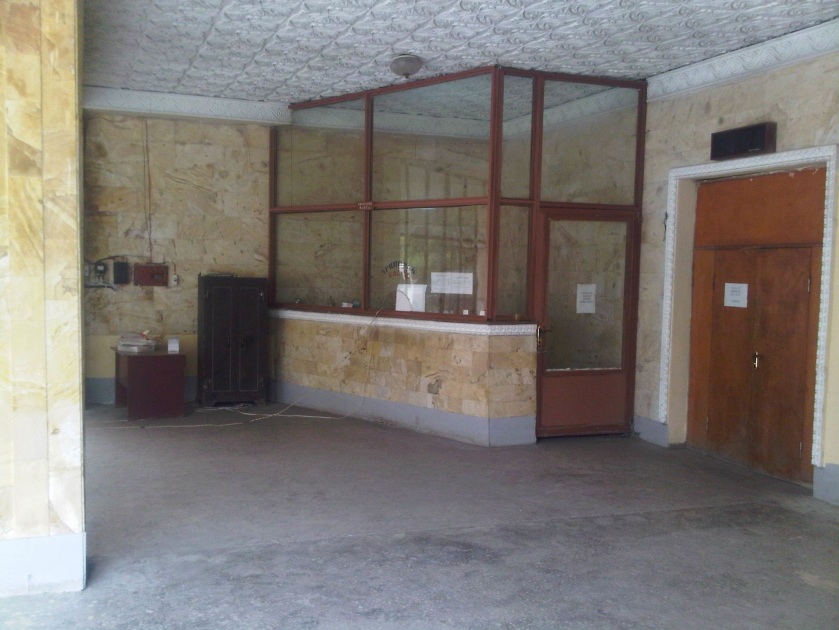 Cut, stop dreaming and back to reality. We decided to just drive on for another two hours. Two times we drove behind some completely crazy Armenian pothole slalom champions. Unfortunately we got the camera on late and we couldn’t film them as they raced in front of us, avoiding holes on all sides of the road. Some days ago we complained about Georgian roads, then about even worse Armenian ones. By today we got used to them and are ourselves driving slalom as the locals do. Videos here and here and here and here (unfortunately the camera got some dirt from the road on it while filming).

At the border we paid another USD 16 in exit fees for the car and USD 5 for agency taxes and entered Georgia without further hassles. It felt quite different. No rotten factories, proper roads, you can see the people in their cars (windows are not completely black as in Armenia). We forgot about the missing road signs and just drove the known road to Tbilisi. This time we stayed in another part of town, and it felt familiar, we drove at ease through the streets we mostly knew.

To close this day we decided to go to eat properly and chose the “Bread House“. Apart from the folk music in the disco room that every now and then acoustically invaded the calmer front room, the dinner was spectacular. Eggplant rolls filled with walnut, cheese rolls in yogurt and mint sauce, chicken in garlic and herb broth, pork ribs with potatoes, and a tasty Georgian red wine. What a great way to close this day! 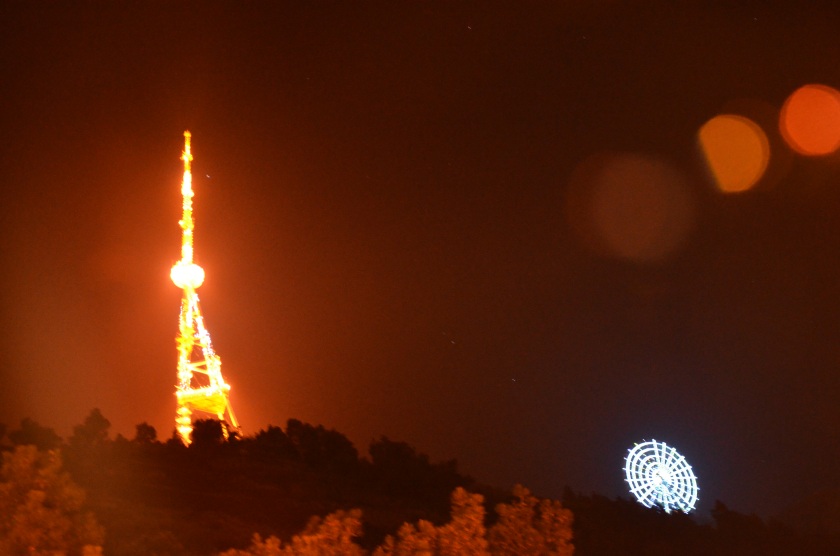