Today we arrived in Pakistan, and we were alerted due to the terrorist attack of two days ago in the area we’re traveling through. Nothing happened to us though, we’re fine. And we feel this country has welcomed us like few others, by its relaxed atmosphere, natural beauty, friendly people and lack of complications.

But let’s go step by step.The morning in the hotel can be skipped, we wrote extensively about it yesterday. For Helena’s birthday breakfast we went to the Crown Inn again, and indeed they do have a great breakfast for local standards, with both western and Chinese food. We left quite late at 10:20, but then learned we would have to pass all exit controls in Tashkurgan and not at the Khunjerab pass, and the immigration control only opens at 11:00. So we had to wait, and then it took us two hours to finalize all controls. We don’t know if we just got used to it, or if the Chinese did not top the Turkmen in the contest for the worst border harassment, but although lengthy the controls were less bad then we had feared. At the end our guide gave us back out sat phone, and handed us the Chinese license plate and driving licenses. Good that we got it on the way out.

Anyway, as soon as we were free (the guide left us at Tashkurgan), we speeded to the border. On the way we parked briefly to put the camping equipment from the roof into the car. We had just stopped and gotten out of the car when a white minivan came racing towards us, a soldier and a civilian got out of the car asking what we were doing and indicating we should drive on. We tried to explain we needed 5 mins to pack, but they wanted us to move on and stood at short distance to us, watching every move. We just kept packing in a hurry. The civilian tried three times to put things from the roof into the car himself, and I had to get loud to stop him. How impolite and intrusive, we hate this!

We lost the minivan soon after and drove the rest of the 130km to the border over perfect roads at high speed, since we didn’t want to waste daylight time to drive in Pakistan. Without further problems we passed two passport controls and left China after driving up the Khunjerab Pass. At 4708m this is a new altitude record for us!

Literally the moment you drive through the gate on the pass out of China the road converted to gravel and potholes. But the Pakistani border soldiers were very friendly (what a contrast to the Chinese), they seemed almost astonished we wanted to drive into Pakistan. After 20 km approx. we encountered road works, and soon after the road became brand new. We drove on this perfect road for about two hours, through an amazing mountain panorama. Once we entered Pakistan the mountains started to change and became very impressive. The valleys are deep and narrow here, and we wondered why we didn’t see one avalanche after the other since he mountains were so steep. The roads are brand new most of the time, the tar is littered with stones though (probably falling off the mountains every day) and the majority of tunnels are still under construction.
We passed some police control posts and had to pay 8 USD each for a natural park through which the road leads, before reaching immigration and customs at Sost. In 30 mins we were done, incl. carnet de passage. Following the advice of the customs officers we went to see the police station to ask if we needed a security escort. But the officers were cool, they registered our data, called the next station at Gulmit and alerted them of our arrival. We were told security was not an issue in the Hunza valley, but after Gilgit we should be alert and drive in convoy. They also explained us how to cross the Attabad lake. And in the end they invited us to a cup of tea and some cookies. The tea here came with milk. A rare show of super friendly police officers. After the Central Asian and Chinese experiences this was a surprise.

We asked what had happened two days ago, to understand how the local security forces saw the attack. We got no answers. But some questions came up. For example why, considering that you can shoot foreigners unharmed pretty much everywhere in the area, someone had to go in a remote place to do this, 2 days tracking away from the main roads. Or why was there only one western victim, a Chinese-American? Who would profit from this attack? And apart from the usual suspects, the Taliban, who else could have done this? Some agency maybe?

After an hour of more perfect mountain road we started to wonder why everybody was describing the Karakoram Highway as such a driving challenge. The only problem was our car giving error messages again, at under 2700m on a perfect road. Miraculously they disappeared after half an hour again. There’s a comfortable motorway through the mountains up here, and you can admire the fantastic landscape. Snow covered mountains, deep canyons, villages on green meadows and surrounded by poplars. But we didn’t have time to finish the thought as the road suddenly disappeared and a track of sand and mud opened up in front of us. Water had washed away the road, and it seemed as if this area had been submerged until recently. Fine sand was everywhere and the trees were all dead. After half an hour of tough off road driving (with no hits to the car!) we found the Gulmit police station, where we stopped to notify them of our arrival and ask for help with crossing the Attabad lake. They called the officers at the boat stop and told us to go meet them.

So we did, and shortly after we drove towards the lake’s shore, some barracks left and right, trucks and jeeps with people and merchandise everywhere, the air full of dust. This lake, created in 2010 by a landslide, submerged various villages an some 20km of KKH. The only way to cross it is by boat. We were greeted with many astonished looks, in our dirty Evoque. The police officer led us to the boats and told us which one would take us across the 20km of lake. As we were waiting, a man with a long beard came to ask us in perfect english if he and his family could come with us on our boat. We told him to ask our “captain”. In Sost we got told the crossing would cost 3–4.000 rupees, here they asked for 8.000. We insisted on 3000, they lowered to 6.000 and we agreed on 50 USD, around 5.000 rupees. Then the crew pushed and pulled their boat through the others to the shore, measured the distance of our wheels with a thin rope, adjusted the wood across the boat to the measure and fixed the boat so that I could drive onto it. I got into the car and started the slow balancing act of driving the 2,5 tons of car and equipment onto the wooden boat that reminded us a lot of the Thai longboats, both because of its form and color. Several guys indicated me how to move and when to stop, but they didn’t necessarily give the same instructions (video coming once we have internet). They stabilised the Evoque with four stones under the four wheels, and started pushing the boat into the lake, away from the other boats.

As long as we had been tied to the ground the car seemed fine, but as we left, the boat started moving from one side to the other. We saw the car already gliding into the turquoise waters. But no, although slightly hanging portside (the left, for those who don’t sail;-) ) we moved on smoothly, the two engines working at full speed. Then followed an hour of amazement. Not only because of the absurd situation of our car being carried sideways on a wooden boat, or because the captain kept pulling water out of the bottom of the boat. But also because of the beauty of the lake, changing colours from turquoise to deep blue every time the sun appeared or disappeared, and the impressive canyon around us. Waterfalls on the mountain rocks. Villages submerged by the lake. Snow covered mountains at a distance. Other boats passing by. And the sense of adventure. Shortly before reaching the other shore the lake takes a turn to the right and there were huge clouds of dust over the water, from the construction site. The Pakistani together with the Chinese are bulldozing and dynamiting roads and tunnels into the mountain. An engineering miracle, given the almost 90 degrees steep rocks. Approaching the landing site we didn’t really understand how we should get off the boat. There were several trucks parked with their backs to the lake, loading and unloading merchandise. Brightly coloured with all kinds of floral and landscape designs, the trucks get completely overloaded, they are higher then their length. Our boat docked to the land so that we could drive onto the shore, right between two of these trucks, but no further (videos coming). And there we stood, waiting for the construction workers to load some metal bars onto a boat. Since this seemed to take more time, the boat crews started to take all small metal bars with sharp edges away, I helped them, so that we could drive over the bigger bars. One truck moved a bit, and we passed, onto the sand and gravel road. The police registered us, we said goodbye to everybody and drove over the dam into the Hunza valley.

Around here it got green very soon, the villages are built in terraces into the mountains, poplars rise high. We looked for Karimabad, where we had read about a Serena hotel, from the same local chain that had that island of beauty in Khorog, Tajikistan. After asking around we found out the village is a bit up into the mountains. The Serena hotels hotel was a gem, overlooking the valley, the Baltit fort and the nearby snow covered mountain. Here we met the man from the boat boarding again, he was staying in the next room with his family. Aatif and Ambrin have four kids, from 16 years to 10 months, and were very friendly. Aatif had lived for a long time abroad, and came back to Islamabad some years ago. We chatted for quite some time on the terrace of the hotel, overlooking the beautiful valley. We told him about our journey, where we come from and what we do. He had lived for many years in Chicago, his oldest daughter was born there and effectively could have been an American teenager. He also explained us how family ties are so much more important around here, and how people get so desperate if their relatives die for example in US drone attacks, a problem in Pakistan, that people just want to kill themselves, and at that point why not take some more people with you for revenge? While for us this idea sounds completely absurd, we could follow the reasoning at least.

The Serena also had a good restaurant with a mixed menu, ranging from Hunza club sandwich to Chinese dishes to local cuisine. Helena’s birthday dinner was great, we hadn’t had so much good food in a while. As we went back to the room, exhausted and amazed by this adventurous day, the moonlight illuminated the mountains in front of us, the snow shining bright.

Trip data for the day 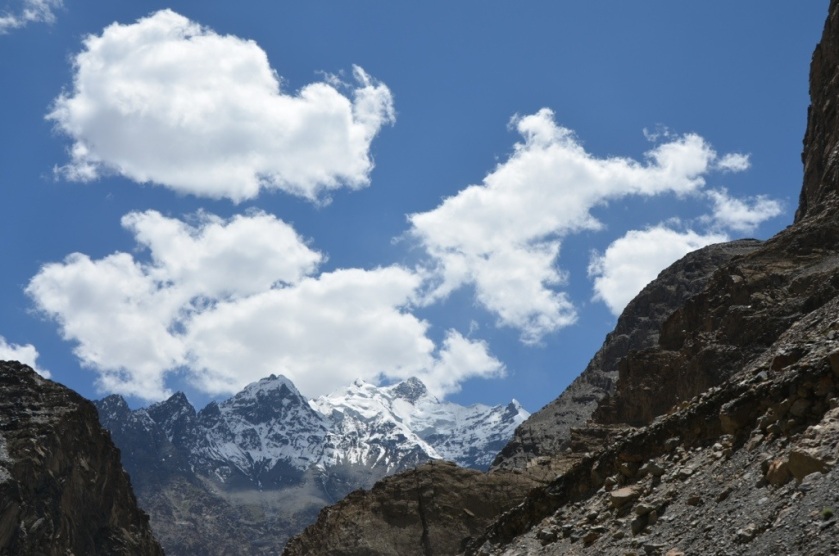 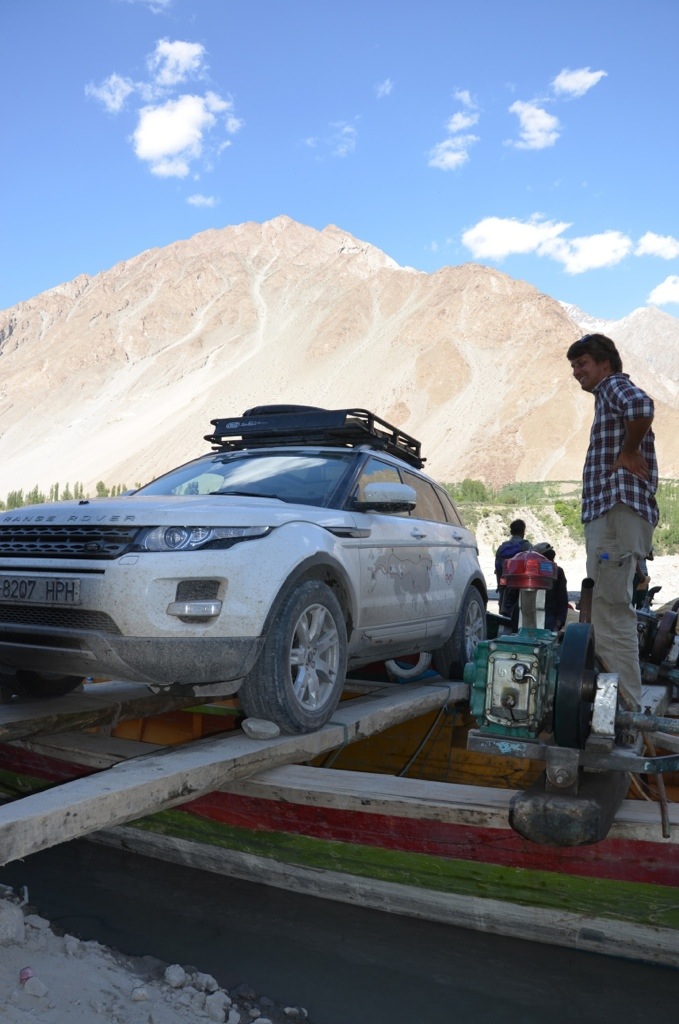 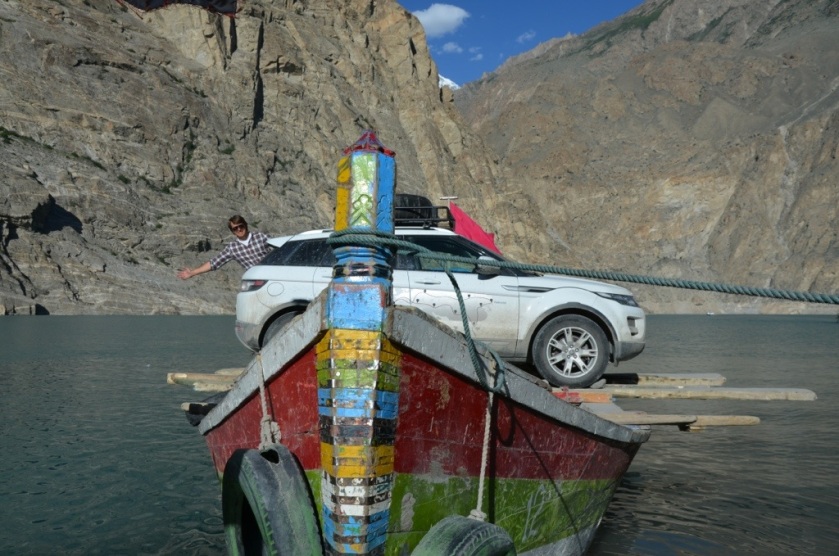 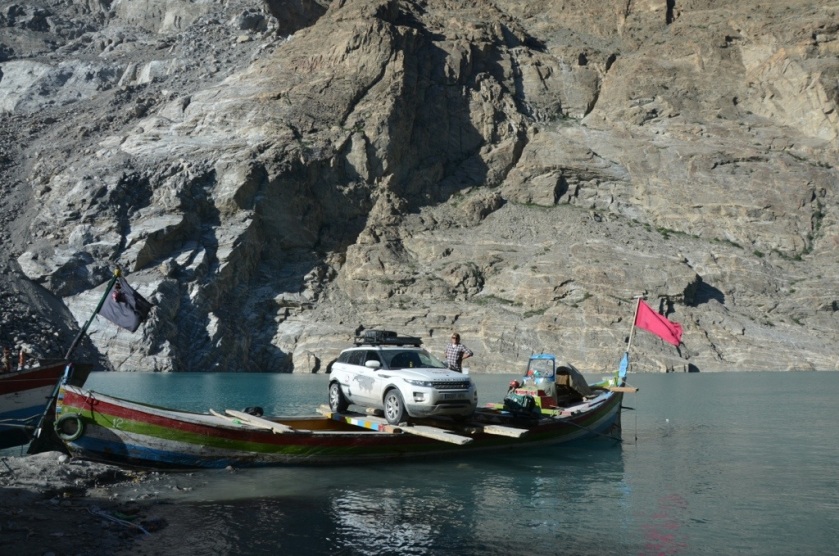 9 thoughts on “We Love Pakistan”