New Delhi has been our third major milestone on this journey, after Istanbul and Tehran. We’ll have to skip the next two, Bangkok and Beijing, due to the changes in our route we mentioned in our last post. In New Delhi we got the Evoque finally checked by a Land Rover service station, where it stayed for over a week. In the meantime we headed for the beach and relaxed.

Yesterday we spent the morning to organize our travel changes and next stops. For lunch we headed to AMP Motors, the Land Rover dealer and service center in Delhi, to pick up the car. We arrived shortly after 14:00 as requested by them and had to wait, since the person taking care of our car was out for lunch. It took us more then five hours to get the car out of the service center! And most of that time just waiting, especially after being presented a hefty bill for some repairs. The payment took forever too. They expected us to pay in cash, a four digit amount at a luxury car brand shop – we couldn’t believe this. When I told them that credit card was the only option to pay, another ordeal started, with the usual phrases like “my machine is broken, let me drive you to some ATMs to pick up cash.” We had a similar situation in Baku, somehow Land Rover dealers get terribly Lada or Fiat when it comes to payments by credit card.

When we finally left it was getting dark, the day was gone, all plans for sightseeing in the afternoon scrapped. To save at least something of this day we drive to Dilli Haat, a food and textile market. It was astonishingly clean and organised  and we needed a paid ticket to enter it. The products on sale confirmed all clichés on Indian souvenirs, clothes and textiles etc you get from ethno shops in Europe. We ate at a food stand, spicy testy food in the heat of here night, and drove back to the hotel.

The next morning we finally got back to traveling mode. We had missed it! The car was packed in half an hour, but we were completely wet again in no time from the sweat. Before leaving the city we wanted to see the Red Fort, so we ventured into Delhi traffic. It took us almost an hour to drive the few km to the fort. At least we almost dried during hat time. Just to get completely wet again after the hour and a half of walking around the gardens of the fort. While from outside the red walls and towers look impressive, we were a bit disappointed to see the fort in bad conditions on the inside. This is a Unesco world heritage site in the capital city, and we have seen plenty of amazing sites during this trip and many others that can be compared. We would have expected the level of maintenance to be quite high. But the whole site was run down, and even the structures erected for restoration look like they have been there forever and stood abandoned. There are buildings with astonishing decoration on columns, ceilings, walls. Floral ornaments in coloured stones on white marble background or designs carved on the white marble itself abound. But the state of them is not good and in need of repair. This must have been an amazing place centuries ago. 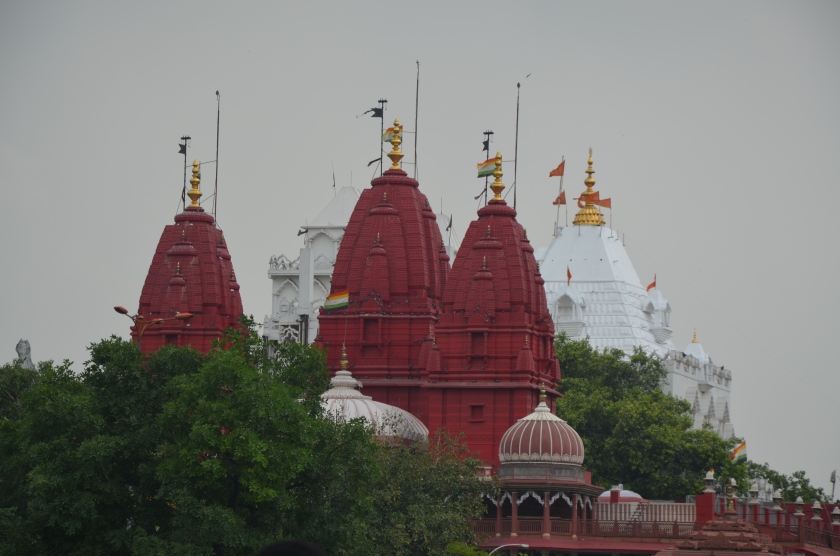 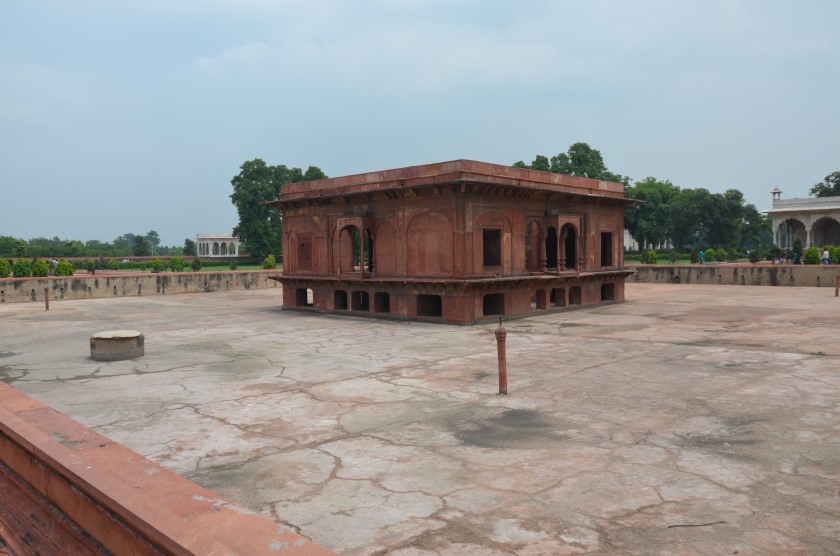 Back into the car, we dried up for the second time in this day as we drove through Delhi city traffic. Driving is a big word, since the flow of cars is very painfully slow and the behaviour of traffic participants is reckless, chaotic, suicidal. It took forever to reach city limits, and we were surprised to see that the distance we travelled in this multi-million metropolis was quite short. It was lunchtime and we got hungry, so we started to look for some roadside stand or restaurant as we always do. Here we couldn’t find anything. And given the extreme dirt around us (a tough competition with China we would say) and the litter and mud everywhere, we opted for a mall we found. There the food court on the last floor reminded us of Soviet self service restaurants, dirty, almost deserted, run down, grey. We tried to order some food, but everything we chose was not available. So the only option left was McDonalds, how sad, and how bad was the food! But at least we ate something, it was clean. At the lower level we went to the supermarket to fill up on water, snacks and other items for the road. 20 minutes to shop, 30 minutes to pay? With almost nobody waiting in line the staff managed to make this a looooong operation. Every other person coming along was served before us while the guy at the cashier slowly passed our items through the scanner.

As we drove on, having lost already a lot of time, progress on the road was very slow. India is the first country we travel through that seems to have no proper motorway network. The road from Delhi to Agra, although with less construction like the one from Lahore to Delhi, was just two lanes on our side, and there were plenty of inhabited areas that converted it to a local town road, with all the usual suspects on it (pedestrians, all kinds of animals and vehicles, in all directions and at all speeds or just stopping and waiting). In towns this traffic condensed to a conglomerate of flesh and steel, flavoured with diesel fumes, dust and all kinds of odours we preferred not to identify, flowing along the concrete blocks separating the directions. We also learned to watch out for buses, not only because they do whatever they want on the road and don’t care if they cut your way and you might crash into somebody, but also because once they stop, people spit some brown stuff out of it in quantities on all sides. 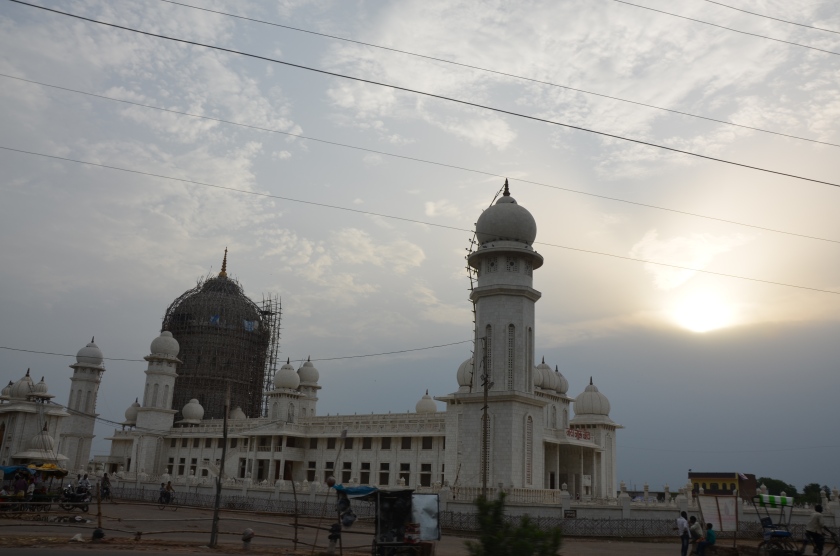 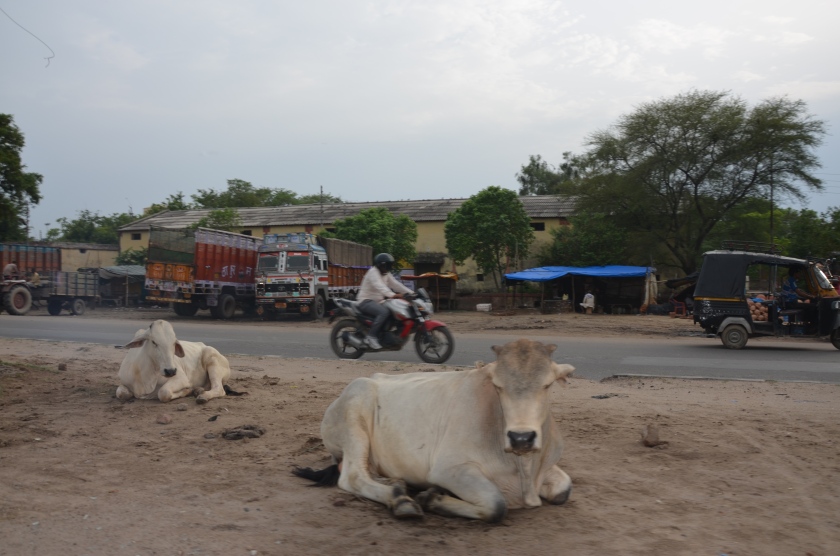 At dawn we reached Agra, the city of the Taj Mahal (among other things). Following the roadsigns we got lost twice, including a venture into a pedestrian roadside market where we had to turn around and drive back. Manoeuvring the Evoque in this sea of people, bikes, scooters and food stands was a challenge. And so was finding the Radisson hotel. We followed the few roadsigns for almost half an hour through the darkness, almost driving over plenty of other people. We couldn’t stop the car, because every time we did so, within seconds we had plenty of people glued to our windows, begging, trying to sell us all kinds of things and services, knocking on the windows and shouting. We then called the hotel, but they were not capable to give us clear driving instructions in english. We somehow made it in the end, exhausted and in desperate need of a shower and to get down after the traffic. We skip the description of the staff’s friendly incompetence at the reception and restaurant. Tomorrow we will see the Taj Mahal and hope to finally get enlightened by this place.

Trip data for the day

2 thoughts on “Out of Delhi”