New Delhi (India), 18.08.2013
Getting to New Delhi from a remote Cambodian island isn’t easy, and the trip took me through several places during some days. In the early morning a motorboat took me to the main quai on Koh Rong. The sun was shining, a breeze blew over the bay, everything was fine. Once on board the ferry boat to the main land, dark clouds came up and it started to rain. Only when everybody on the upper deck was well showered, the ferry took off for the two hour ride to Sihanoukville.

The sun came out again as we slowly moved over the sea. At noon we reached the port, and a tuktuk drove me to the airport. We hadn’t left the port yet as it started to pour down again. The driver closed the tuktuk, put his rain poncho on with a laugh, and off we went for a 45 mins drive through Cambodian rice fields. At the airport I dropped my bag and went to a local market to eat something. The market was quite an adventure, with meat and fish being sold in the dusty and hot open air stands, with flies everywhere. It smelled, but I wanted to try the local Khmer food. Lunch was good, noodle soup with minced chicken and more minced chicken with herbs rolled in a thin bread crepe for approx 1,25 USD.

Since I had seen Phnom Penh twice already, I opted to fly from Sihanoukville to Siem Reap again. Last time I managed to see the major temples of Angkor Wat in a morning, but there were more of them I had not visited. The 50 minutes flight was quick and comfortable, and once in town I went for dinner on the Main Street of Siem Reap. The next morning a Tuktuk picked me up at 05:30 from the hotel for a tour of the temple site. Three weeks ago I had complained about the many tourists around in the early morning? This time there were twice as much people there, and many Asian tour groups among them. All major temples were so crowded it was almost impossible to visit them properly. The heat made me sweat like crazy and slowed everything down. Apart from taking sunrise pics from Angkor Wat, this time I saw some smaller temples and spent more time walking through the forest. The temples and nature are mingling in a spectacular way, fern and roots are everywhere, coloring and distorting walls, roofs, columns. This site is truly magic. Not so magic was the horde of monkeys rioting around Angkor Wat itself. As I came out of the rear entrance, my breakfast box in a plastic bag in my right hand, suddenly I saw three of these beasts running towards me screaming wildly, with furious looks. I didn’t have the time to realize what had happened and how these guys could appear out of nowhere, that they had stolen the box, opened it, and were fighting over my sandwich, egg and toast. Even the jam and butter were eaten in seconds. Other, smaller monkeys followed immediately. They stole each other pieces of food, then suddenly started random sexual intercourse, then jumped up the stairs or ran away, then fought.

In the afternoon the tuktuk took me to the hotel, we picked up the bags and drove to the airport. Another short flight to Bangkok followed, where I chilled for one more day, preparing the next steps, the shipment of the car, flights & hotels etc. I also went to see the royal palace, a decade after my first visit. It had been renovated sumptuously, now shining in a lot of gold, mirrors, stones and fresh color. 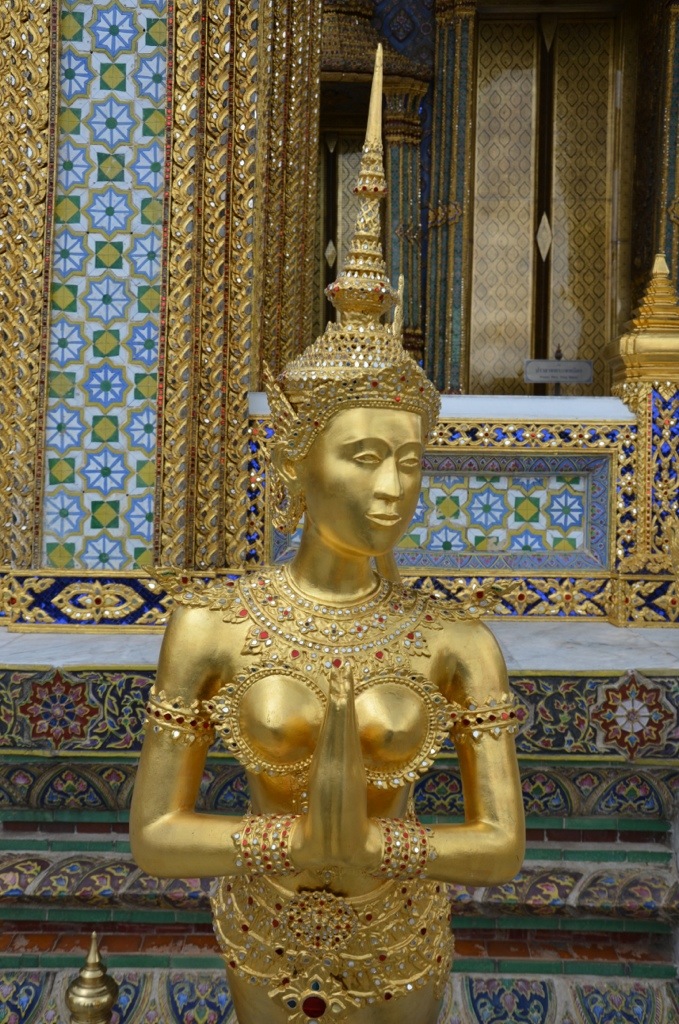 Finally, on Sunday came the time to fly back to New Delhi. As I arrived, I knew there would be a change outside of the airport. The heat was intense, it rained as I left the terminal. It took just five minutes outside to freak me out. I ordered a black and yellow prepaid cab, but a driver took me to a car where another passenger was waiting. I didn’t want to share, so I went to the stand assigned to me by the dispatcher. No cab there. Illegal cab drivers wanted to lure me into a ride. A bugger insisted to carry my bag. I finally found a cab, completely rotten and dirty, but took it to get out of there. The one wiper of the cab didn’t work as it started to rain even more. The interior of the roof was cut open, rain poured into the open windows that I couldn’t close. The engine barely made it into third gear. The driver had a fake seat belt he put on. It reminded me of Naples, where people wore white T-shirts with a black bar on them to avoid wearing a seat belt. The horns of the cars drove me mad. In no time I was again down into Indian chaos. What a change after organized and friendly Indochina!

Tomorrow I’ll get the Evoque back and finally drive to Bombay. I’m curious to see if everything goes well. India is a country where everything can happen at any time, so I’ll keep fingers crossed for tomorrow.