The moment I boarded the plane in Fakarava I guessed it would be hard to top the experience there. Back on Tahiti I spent a night in the <sarcasm> romantic, comfortable and well wired Tahiti Airport Motel </sarcasm> across the street from the terminal and the next morning took an early plane to Raiatea, in the Society Islands. Madame Emma picked me up at the airport and we drove 15 mins along the eastern side of the island to her pension. Contrary to Fakarava and the Tuamotu atolls in general, where the maximum elevation is just a couple of meters above sea level, the Society Islands are huge rocks in the water surrounded by a reef. Raiatea rises up to 1.017m at its highest point, and most of the time I was there the mountain tops were covered in clouds, giving the place a mysterious look.

After a breakfast on the pier of Pension Opeha, admiring the bay in the morning light, I organised a scooter and ventured off for a discovery tour. The ring road around Raiatea is just 80km long, and there are few other roads you can take. I started driving clockwise, but then took a shortcut over the mountains to the southern end. I expected great views of the jungle covered interior of the island, but didn’t even drive uphill too long that I found myself already back in Faatemu bay. The beach had no sand but just mangroves, so I drove back along the eastern coast to check out a historic site I wanted to see. Cultural sightseeing had been pretty much nonexistent since leaving India. The ride along the ring road seemed to take forever and led along many small bays where crystal clear water was surrounded by palms lined shores. Along the roadside flowers in bright red and light pink grew in opulent bushes. From some higher points the views of the lagoon around the island were just spectacular, with the ubiquitous bright turquoise and deep blue, catamarans sailing along and only few clouds on the sky. Reaching the Marae Taputapuatea complex I was very curious to see what the LP guide describes as the most important spiritual site in Polynesia, dating back to the 17th century. [At this point I must excuse myself for probably sounding a bit snobby when I write about sites like this. I grew up in an almost 2800 years old city, filled with monuments of all centuries and of immense world heritage importance left and right, that had been the center of the known world from a European perspective for centuries, with few other cities surviving to our present days encompassing it in historic relevance and preserving their past glory’s relics. With this background it is hard to appreciate the cultural richness of other places, since most of them seem quite recent or not living up to the splendour. Traveling through Europe made me realise this just to some extent, since the density of world heritage is high and there are plenty of leftovers of thousands of years of human civilisation. On this journey I have started to understand this better. Unfortunately, this is not the case in many other countries. In Polynesia for example European priests were the first to keep a written record of a centuries old culture that was used to transmit its heritage by oral accounts, not leaving any visible trace. In other places the use of wood or mud in construction (as opposed to stone) or desertification and emigration of people has wiped out traces of the past, saving just relatively young sites of historic relevance into our times. Wars and natural disasters have contributed to further destruction as much as poor management, lack of funds for preservation or ideological opposition to past cultures.] Long story short, I stood on the Marae with high expectations and was disappointed by the couple of stones I found lying around the site. Few were decorated, and a handful of wooden statues stood quite lost against a wall. 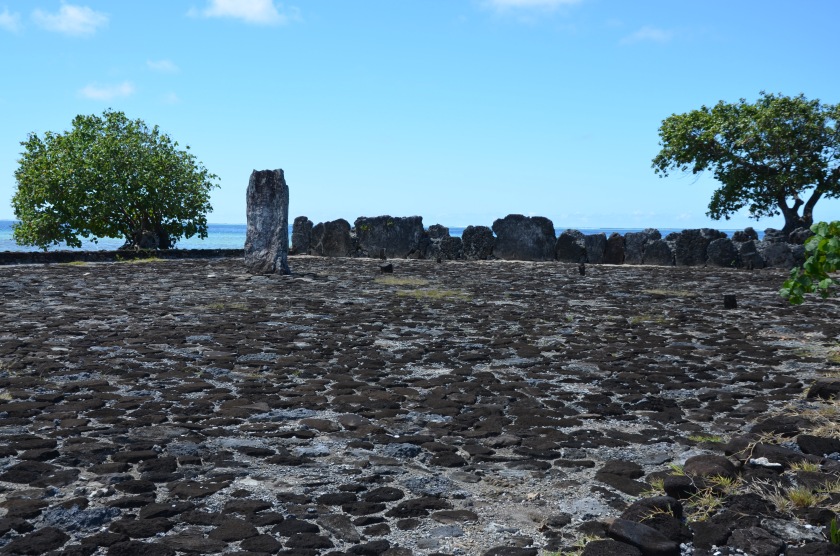 This was it, and I got back onto the scooter driving again clockwise around the island. For lunch I stopped at a resort I had spotted in the morning, situated in a lonely turquoise bay and with just a handful of guests in the restaurant. The very tasty cuisine was a relief, since so far in Polynesia I had eaten just at pensions and the omnipresent “roulottes” or “snacks”, roadside vans that sell food following a standardised menu including grilled meat, chicken and fish and raw fish in coconut milk. This usually comes with “frites” or cold rice. In this place a glass of chilled white wine started my lunch properly and a tasty tuna steak gave my diet a welcome variety. The cafe with a selection of dessert tasters rounded it up elegantly, and with a smile on my face I continued my tour of this lovely island. Until I saw the gasoline left in the tank – just over a quarter of it! I was on the end of the island opposite the main town of Uturoa and had no idea if there were gas stations elsewhere, I had seen none so far. Slowly and without stopping I drove on, alternatively admiring the landscape and great lagoon views and the gasoline indicator. After an hour of driving and no gas station on the horizon I stopped and asked a man standing at the side of the road. When he saw the gasoline level at half the reserve tank he started to laugh and told me the next station was another 37km away. Well, what could I do? Already seeing me pushing the scooter on a warm and sunny day like this I drove on. Somehow I made it to Uturoa though, and bought gasoline, drinks and an ice cream. Back at the pension I chilled on the pier until the Mosquitos reminded me it was late and I should get dinner at the next roulotte: raw fish in coconut milk with cold rice, 1400 XPF.

The next day was reserved for a boat tour around Taha’a, the neighbouring island sharing the atoll with Raiatea. After an initial hiccup in the agreed pickup location I made it to the pearl farm that was the starting point of the tour. The weather had changed, with plenty of clouds, some wind and heavy rain moving along the horizon. The boat took off, speeding around our island and across the lagoon over to Taha’a. As we arrived at a reef for our first snorkelling stop of the day there was no sun, hence the underwater experience was also not the best. Compared to Fakarava this was a joke, apart from a few colourful fish there were no real attractions. As we moved on, it started raining in the middle of the lagoon, and shortly afterwards the engine started to smoke and we had to continue at very low speed in rougher sea, dark clouds getting closer to us. Somehow we reached our next stop, on the other end of the island, from where we could see the silhouette of Bora Bora on the horizon. We went to see a vanilla plantation run by a Danish guy, who explained us the whole process from starting the first plants to the final product. It takes roughly three years and a lot of manual processing to finally hold the supposedly best vanilla in the world in your hands. Pearls and vanilla are the major export products around here. Back in the boat, the engine was fixed, the sky opened up and the sun reappeared. We crossed the lagoon for our lunch break on a small island with a fish farm. At lunch I got to know Kendall and Steve, two friendly Californians that I helped translating (and reassuming) our captains explications from French to English. We were shown the rays and other fish of the farm as well as a collection of big shells and the beasts inhabiting them, before taking another short snorkelling tour. Our captain explained us in great detail and a lot of humour all kinds of aspects of marine life and Polynesian lifestyle. Last stop of the day was a turtle protection farm, where a local NGO saves these impressive amphibian animals from slaughter, cures the wounded ones, tags them and ultimately releases them back into their natural habitat. After completing the tour around Taha’a we rode back over the lagoon to Raiatea. The sea was very calm at this time of the day,     mirroring the high mountains of the island in the last light of the day. Back at the pension I had a Hinano beer on the pier, exhausted from this day full of action on the sea. And more raw fish in coconut milk. With cold rice. Delicious though.

Day three on Raiatea started late and with an extensive breakfast, featuring delicious local avocado, since chilling was the only task on the agenda. Weather was sunny but windy, and I spent ours on the pier reading, writing and watching the lagoon over a Hinano. At lunch I had, guess what, raw fish in coconut milk, but with French fries. They were so fatty that my stomach fought with them the entire afternoon, on the way to the airport, while waiting there and during the 1:15h flight back to Tahiti.