Back at the hotel, I picked up my bags at the concierge desk. I handed over my baggage tag to “girl 1”, who passed it to “man 1”, who passed it to “girl 2”, who took “girl 3” and disappeared in the storage room. Then both girls 2 and 3 came out again without bags. Then girls 1 and 3 changed positions, went back into the storage, and came back with my bags. Things take time in Japan, but are done properly and in all order…

A few metros and trains later I arrived at Tokyo station, and bought my Shinkansen ticket. Ironically I crossed several western travellers with very desperate or frustrated looks. Once on board of the very clean train, the doors closed, I sat in my orderly and clean seat, and soon afterwards could admire the very orderly and clean countryside passing by. 2,5h later the Shinkansen reached Kyoto station, and somehow I found my way by bus to the hotel I had booked there. It was dark when I arrived, and although I hadn’t done too much today, I was exhausted. 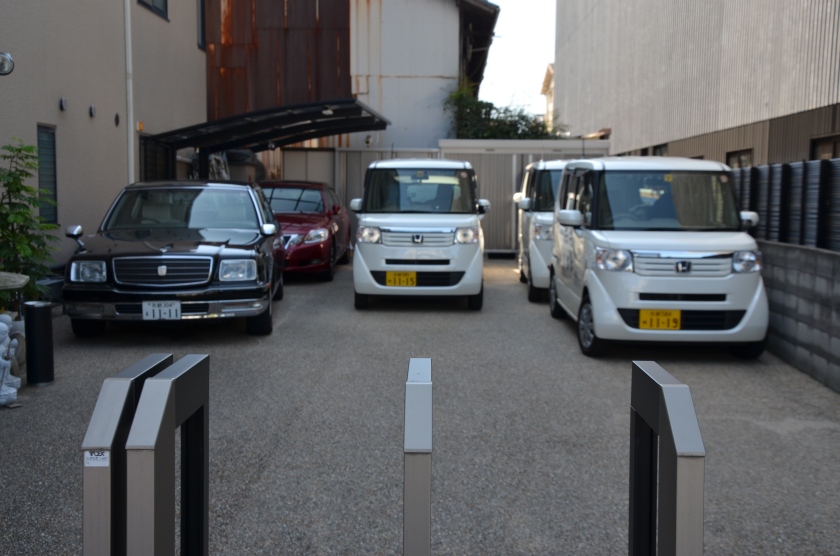 In the evening I decided to venture into the older part of town (that in Japan seems to be quite a big word given the tendency to modernise everything). A taxi took me to the Ponto-cho area (980 Yen), where I walked through small streets full of great restaurants. There was a mix of touristy, modern and traditional ones, many of them with lanterns outside, illuminating the street in a very lovely way. I got turned down in two places with the excuse of the staff not speaking english, although I suspect they just didn’t want a tourist in their place. Ultimately I found a cozy restaurant and had a great but very expensive dinner. 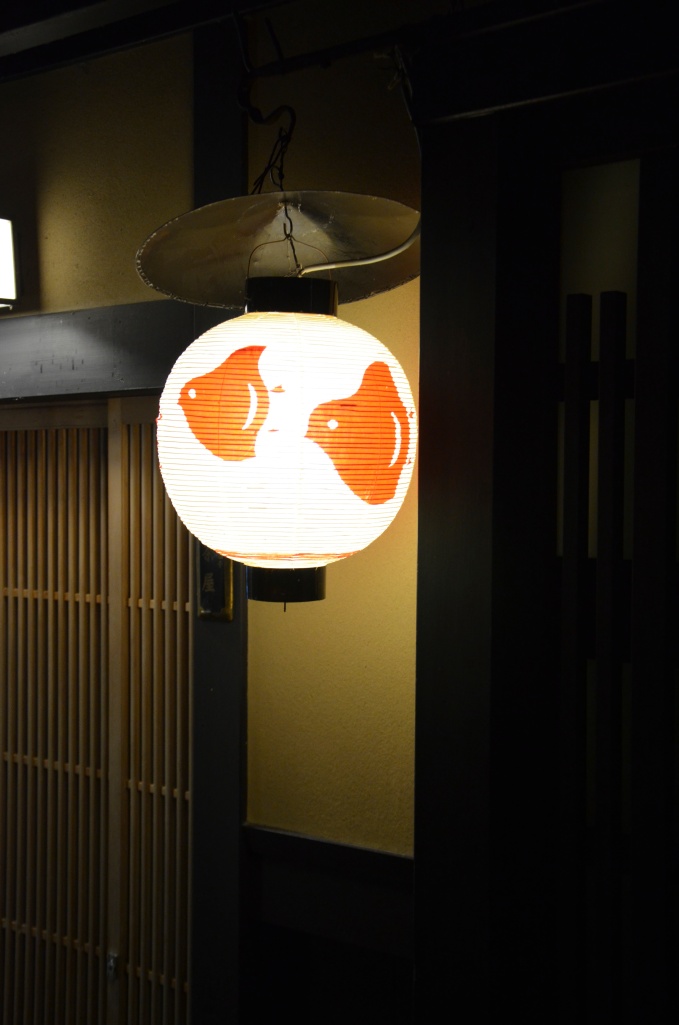 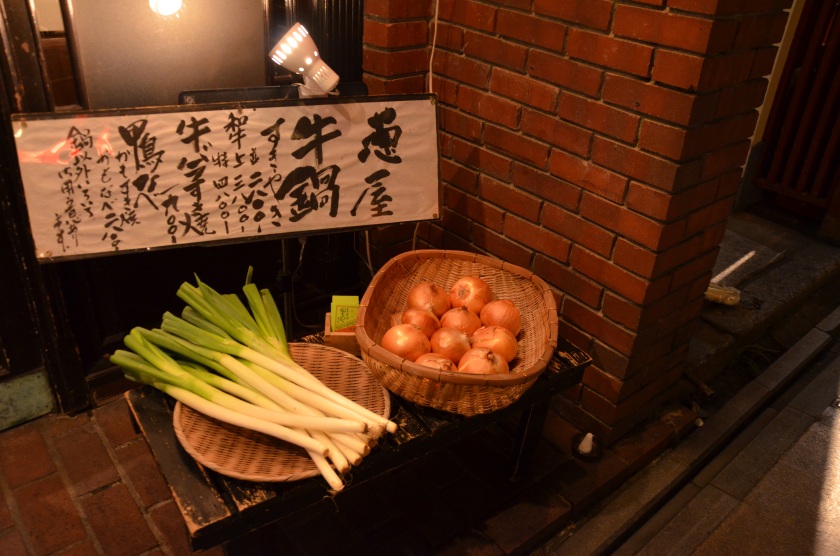 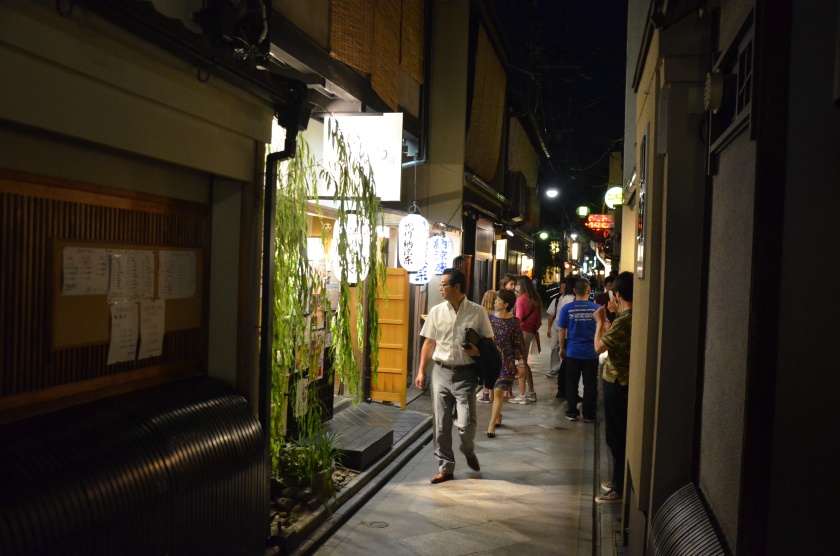 The next morning my discovery of Kyoto, the old imperial capital, started right across the street from the ANA Crowne Plaza hotel with a visit to the Nijo-jo, a shogun castle dating back to the 16th century. This was my first contact with an old Japanese site, and I must say that it was very different from anything I’ve seen in other countries. The castle had many parts built in wood and not just stone. Also, while it was big, it didn’t seem massive while walking through it. All elements (gates, walls, buildings, gardens) had a sober but harmonic touch. Decoration was down to a minimum, mostly in the details (roof tiles, door handles etc) and focused on the interiors (wall paintings, panels etc). Another remarkable element was the use of graphic design in decoration rather then paintings trying to depict real life scenes. Abstract elements of nature gave the wooden interiors of the buildings a distinct, very elegant and somewhat modern decoration. The whole site emanated calm, tranquility, order, perfection. 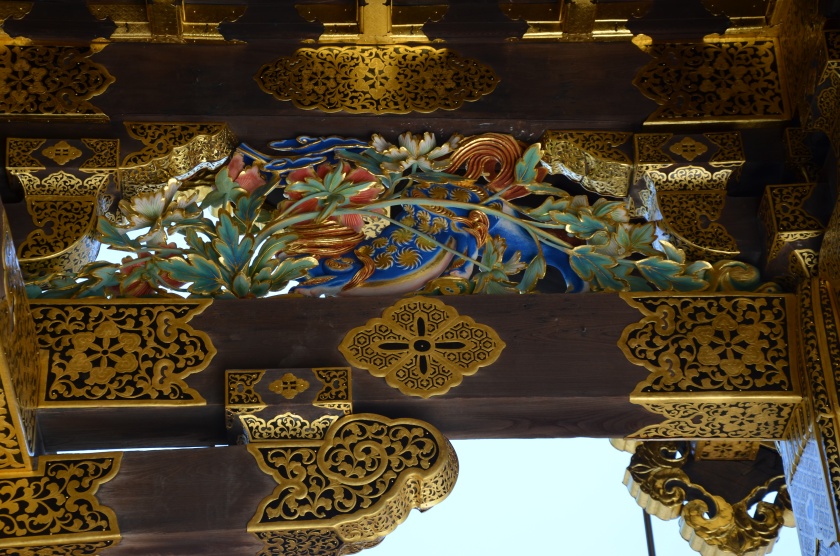 A few blocks away, my next stop was the imperial palace and park, that also included several mansions of families tied to the court. Everything was very well kept, tranquil and few people where around. I couldn’t enter the palace, since an appointment was required, so I just took a stroll through the park and let the buildings pass by. At some point I crossed a little bridge over an artificial lake, where girls in traditional kimono costume posed for a reportage. The lake was full of carps, that came to the surface with their round open mouths grasping for air.

In the heat of the day, I took the subway instead of walking south to the next stop: the Higashi Hongan-ji. This temple was undergoing major renovation and most of it was covered by huge protective structures hiding the original buildings. These were the most solid construction covers I had ever seen on any site being renovated, they almost seemed permanent. The parts of the temple I was able to see were, again, very sober and orderly, with relatively little decor. The building stood out for its clean design and structure, and total calm pervaded the entire area.

Not too far away I went to see the Nishi Hongan-ji, another huge temple complex. It was already late, and the guards were closing the premises. Still, I managed to walk around several buildings. These huge wooden structures had a very tranquillising effect on me. The aesthetics of buildings and courtyards were modern yet antique. The more time I spent walking through these relics of ancient times the more I started understanding the origins of the modern world outside. Order, attention to detail, cleanliness, perfection, calm are all attributes that seem to have a long tradition here. 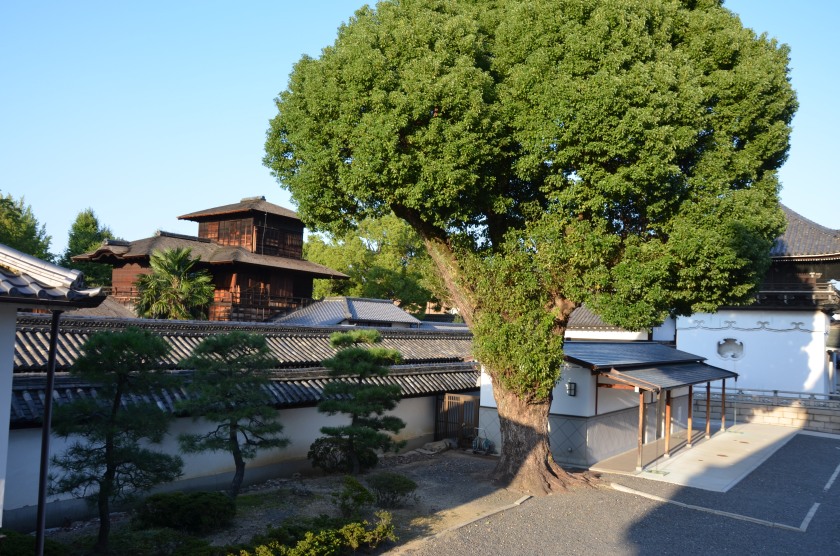 I wanted to see one more temple, but it was too late and I got lost in the streets of the city. Exhausted, my legs in pain, I stopped at the central station to eat something. Many restaurants were full of suit-and-tie men, and I picked one of them. The way to eat seemed very similar to the tapas bars back in Spain. I ordered several small dished, tasting various delicacies like fried pork, St. Jaques mussels, grilled squid. Every dish was delicious, and the cold beer was exactly what I needed after a long day walking around. At some point the guys at the next table started talking to me with a few english words. In no time I had a glass of their Japanese whisky in my hand and we toasted together. Although I didn’t understand a word of their language, they were very friendly and open. Full of impressions of this day, I got back to the hotel, where I fell asleep in no time.