Packing the car and preparing the trip in the early morning took me almost three hours and when I finally sat in the car at 09:13 I was sweating a lot. With 17 degrees Celsius outside and a sun that hadn’t decided yet if to shine or not, I drove through the center of Vladivostok towards the highway. As I passed the WWII heroes monument close to the submarine museum a magic scene appeared. The huge Golden Horn Bridge stood impressively over the bay that reflected the first morning light, colouring the entire scene in a silver light. Above the bridge the sun shined strongly from behind the thick white clouds. Hadn’t I found myself in the middle of a four lane motorway in morning traffic I would have stopped on the spot to admire this beautiful sight and take pictures. Adieu Vladivostok!

Not knowing the road conditions ahead, I had set myself the ambitious target to reach Khabarovsk, the next major town, 750-800km further north. If I would make it that far, I could be in Irkutsk in a week to change my tires before driving to Mongolia, and it meant I would have a chance to meet my planned route’s timing. If I didn’t get that far today, trouble would lie ahead for sure since I’d end up in deep winter way before the end of the journey. Hence I drove speedily, as fast as traffic and road conditions permitted. The first half hour was great, then the motorway converted into a smaller road, and soon after I found myself on a never ending dirt track, covered in huge clouds of dust. Fortunately it was just a long stretch of road construction, and the road got tarred again. Driving and driving, I started to wonder about any villages or cities around – but there were none. After almost an hour driving through the woods I reached a town of Soviet concrete blocks and little less. A bit out of town I fuelled up (1l Diesel 34,30 RUB, approx. 0,78 EUR) and found the tires to lack air. 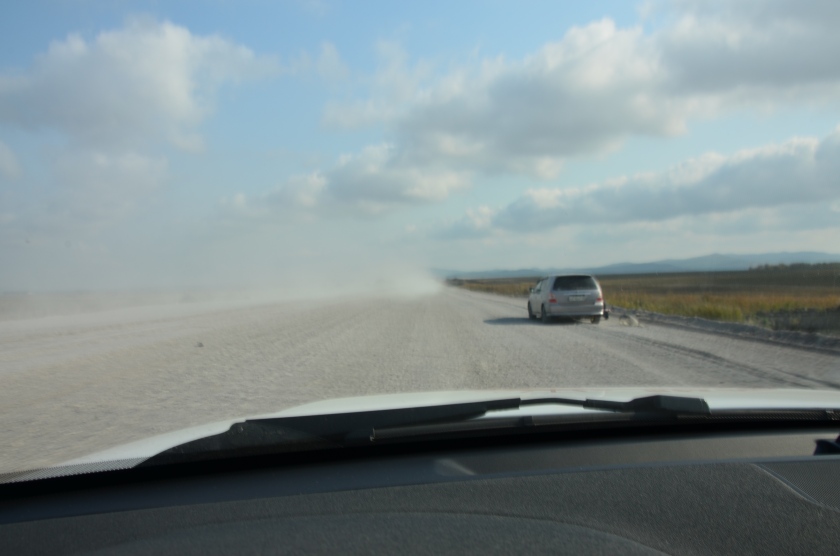 Then followed an entire day through the wilderness. In all these hours of driving I crossed one city and maybe two or three villages, that was all on 800km. There were enough gas stations fortunately, and the road was generally in good conditions. A few construction stretches on untarred road broke the monotony, and the continuous sudden potholes kept me always alert, so there was no risk of getting distracted. And all these features of the day were surrounded by a fantastic landscape, part hills part flat land, but completely covered in an autumn colour spectacle ranging from light yellow to gold and orange to fiery red. There were like islands of picturesque pieces of forest emerging from a sea of yellow and white fields and bushes. The high rising trees had white trunks mostly, and stood so close to each other that I couldn’t see through them in most cases.

At around 16:30 it started to get dark, I turned the lights on. Wonderful, if the day ends so early driving will be a mess! And as if this wasn’t enough, it rained soon afterwards. I don’t know why, but morale stayed high, and I kept making good progress, holding an 80 km/h average speed. On the last 100km to Khabarovsk, when it became clear i would reach the, the sun suddenly came out again. It had just hidden behind thick clouds and fog. In the last light of the day the sky cleared up and the sun coloured the landscape in gold for a last moment for this day.

Driving into Khabarovsk took quite a while. The shows itself from its Soviet side for most of the time. Reading through the LP guide I checked the four hotels I had highlighted, and started to look them up on the map. One stood out, the Boutique Hotel, and without getting lost I found my way. They had a room, and a quite comfortable one, so I checked in there. Time to clean the things from the day’s trip, refill the car with water and anti-frost liquid and start downloading tomorrow’s maps with the super slow internet, and I went for a short trip through the old pre-Soviet center of town. I was amazed to find so many old buildings in very good shape, well modernised. Komsomolskaya square was properly kept, the Assumption Cathedral seemed recently renovated. I arrived just late for the sundown, the last touches of dark red were disappearing on the horizon as I walked towards the panorama terrace over the City Park and Amur River. I felt cold in my dawn vest. A week ago I was sweating in a t-shirt! So I walked a couple of blocks, off the main boulevard down the hill, to find the only Russian restaurant the LP had on offer. It smelled like wet wood, memories of Berlin came up. In general, the old buildings, broad streets and cold weather reminded me of that city a bit. The entrance to the Russky Restaurant led to a door in the basement, and as I entered an empty corridor a guy welcomed me. I heard no noises, sad no guests, smelled no food. Was this a restaurant or where had I ended up? The guy led me through two doors into the dining room, where two other parties were eating. They had an english menu and I ordered. Then came the delicacies, I was surprised how good the food was. First was a basket with four types of white and black bread plus fine lard and a tomato and vegetable sauce. I hadn’t eaten lard in ages, and it was delicious. Next came my first Siberian Borsch soup, that warmed me down to my feet, plus a soft bread with sour cream. And at last I had some Pelmeni (the menu described them as Russian ravioli) in cream sauce in a bowl covered with a bread crust, very much like at lunch in Tbilisi many months ago. A big local beer rounded everything up. As I left, two blond local beauties at the entrance smiled – “do svidanya!” The first day went perfect, right until the end!

3 thoughts on “The Far East in Autumn Colors”