The roadside “hotel” from where I wrote this post was the salvation of the day, although I was surrounded by karaoke in the room under me, billiard in front of my door, and smoking and drumming neighbours next door. May the person that invented karaoke be tortured with ugly music for the rest of all times for the evil brought on earth!

I left UB at lunchtime, preparing the car and food for the road as well as downloading maps took longer then expected. After one hour I had reached the city limits, traffic in the relatively small city was a nightmare. I fuelled up and hit the road, that was in pretty good shape. A pretty boring landscape made me focus on gaining speed, but the farther I got from the city the lovelier nature became. Except for the big clouds appearing on the horizon and coming closer and closer until they darkened the sky completely. A Mongolian driver almost rammed me as I overtook him, another one stepped on the brake after entering the road at snail speed right in front of me as I approached at full speed. I must say the local driving styles are challenging the Indian record of worst drivers on this tour so far.

Admiring the mountains with its caps covered in snow, I suddenly realised the white sky at a distance was actually a downpour of rain coming towards me. Temperatures dropped quickly, and at almost zero the rain became snow. The road was interrupted for construction a couple of times, and then closed for a longer stretch. The tracks beneath the road ventured more and more into the steppe, and at some point I left the main one to get closer to the road again. I had to drive over the fields, found the road dam, and drove parallel to it until it ended. A man came towards me in the snowstorm, I opened the window and he spoke to me in Mongolian and then in German, explaining the road was closed and I should take the track I to the steppe for some km until getting back on the main road. Bizarre to speak in German around here, but the guy was very friendly and I followed his advice. Finding the main track in what by now had become a snowstorm wasn’t too easy, but eventually I crossed it, passed a small river, and drove on for quite a bit until reaching the main road again. But it was still closed, I had to continue on tracks for almost an hour, through a white landscape, following the two black lines of the other few cars that had driven here recently. It got dark, and I barely saw over 50m ahead of me when the road became accessible again.

At temperatures under zero it was clear that camping was not an option for the night. Driving through also not. So the final decision was between sleeping in the car or in a roadside hotel. Since credit card is an unheard of invention around here, I had to check my cash reserves in local currency at the next town, where I found a room for the night (and nothing more, no shower and bathroom) for 20.000 MNT and got a hot mutton soup with mutton dumplings and warm beer for another 7.000 MNT. In one room of this place, some men were enjoying a loud karaoke session, while on the upper floor a gang of youngsters played pool in the open space in front of the only two rooms (one was mine). After dinner I took my sleeping bag out, as in the room next door the inhabitants started a loud drumming and chanting session, while a strong smell of smoke invaded my room. I thought of the snow outside, appreciated the warmth and fell asleep. 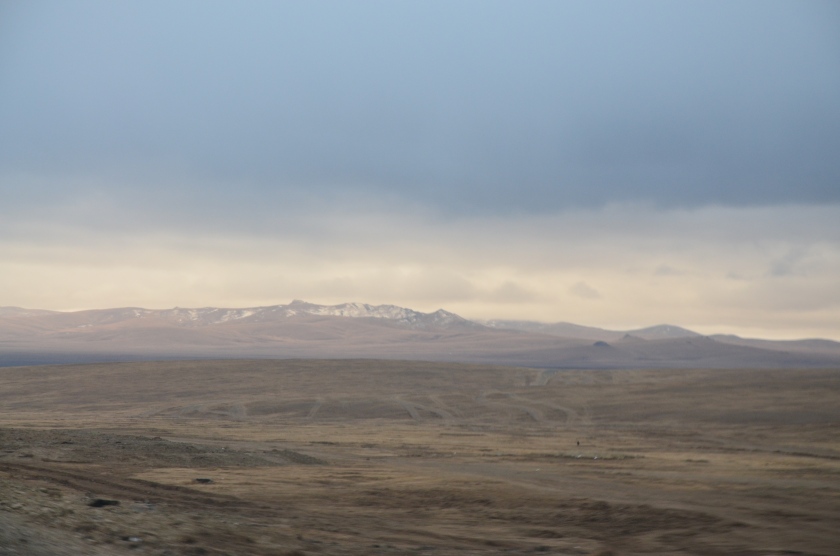