The road from Moscow to Kiev, door to door, was over 900 straight km. I had to turn at only 5 points: 1 in Moscow to cross the Moskva, 1 shortly before the border with Ukraine, 1 before reaching Kiev and 2 in Kiev itself. The rest of the day (and night) I drove just straight ahead. I still couldn’t believe there are no proper highways in Russia, a rich and vast country with a lot of vehicles on its roads. I had plenty of time to convince myself there really are none.

The day went by with few excitements, I drove over flat land, initially brown was the dominant color. At Briansk green took over, the fields on the hills seemed to shine bright after hours of monotony. Every now and then I would cross a stretch of forest. Then shortly before 18:00 I reached the border with Ukraine, converted my last Rubles into Diesel and off I went for the border control. After the gas station I overtook an endless line of trucks, until a police officer ordered cars into a separate line. I waited a bit, and a bit more, and since we didn’t move started to wonder why there was no progress. 30 mins went by, an hour. It was dark around me and I couldn’t see the end of the line of cars. Every 10 mins or so we would move for 10-20m and stop again. If a car didn’t move, everybody else would just overtake it. Plenty of cars just speeded beyond the line and disappeared in the dark. I left the Evoque to check the situation at the border. I walked for 15-20 mins until I reached a gas station on top of a hill, passing cars and vans where people were watching movies, smoking, sleeping, eating, chatting in the dark. I didn’t see the end of the line when I decided to walk back to the car. The waiting would never end and I was stuck in the middle of nowhere. No other border crossing was close, so I just had to wait. Back at the Evoque, approx. 10 cars had overtaken me, but I regained my place. Hungry, I made myself a tasty (!!!) Russian instant soup from my dwindling reserves I had bought in Vladivostok, and opened some canned food. I had spent already three hours waiting and kept recalculating when I would reach Kiev. The evening strolling through the streets that I had been looking forward to was already gone. While waiting I started to fall asleep, and several times drivers from other cars knocked on my window with pretty annoyed faces shouting at me in Russian that I should move on and not let other cars pass me.

After pretty precisely 8 hours of waiting in line, I reached the border station. It dad taken me 7 hours to drive from Moscow, and more then that for the last couple of meters to the border. The Russian border personnel was medium friendly, the Ukrainian ones less so. At customs I got asked questions about my car and had to go into the officers barrack. It was 03:00 in the morning, I was exhausted and angry for loosing so much time for such a stupid thing as a border, and now these guys were making up problems speaking to me in Ukrainian? But at some point they started laughing, I guess I made a pretty sad or strange face, or they made jokes I didn’t understand. And then suddenly I could just go, I didn’t understand why, but also didn’t care. At 03:30 I entered Ukraine, in pitch black night, and with fog coming up in the forest ahead of me. The roads were perfect and I made good progress until I felt my forces were leaving me. I stopped at one of the frequent small bus stations and slept for a while, probably an hour, I don’t remember. I had lost all sense of time and distance. 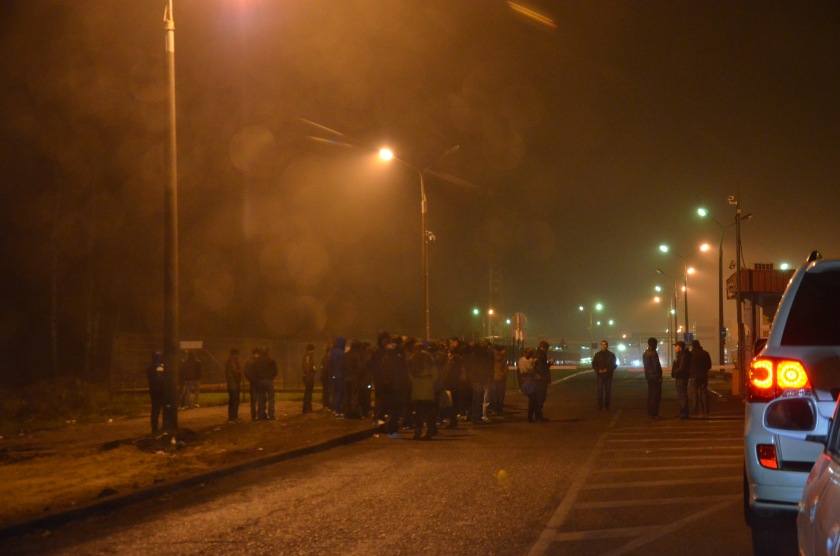 After waking up, I found a gas station with “Evro Diesel”, and fuelled up a full tank. Something had changed. It took me a while to realise, but the gas station was European. Big, clean, with different types of Eco-fuel, a proper shop selling snacks, newspapers, hot food and drinks and all kinds of things. Staff was friendly and I felt one step closer to home suddenly. The time zone had changed, Ukraine is one hour close to Europe, and I got completely confused. As I drove into Kiev by night, crossing the Dnjepr a beautiful baroque and neoclassic city revealed itself piece by piece, street by street, building by building. Another surprise in Eastern Europe! I found my hotel and fell asleep instantly, completely exhausted.