Almost 20 years ago, on one of my first tours by car, I had visited the heartland of Greece, the Peloponnese. That trip had left many impressions in me, among them the love for Greece and its culture, and it got me hooked to exploring places on four wheels. I remember the simple villages I had crossed, every valley had natural beauty and archeological sights on offer, roadside tavernas were great for a rustic lunch and a refreshment during the heat of the day. Now, on my way back, instead of just driving from Athens to Patras in a couple of hours to take the ferry, I had planned to spend two days exploring this relatively small peninsula full of history.

As I drove out of Athens the sky got grey and cloudy. Half way to Corinth I left the motorway and drove along the sea until I reached the Isthmus on the south-eastern coast. The moment I crossed the canal, raindrops started to fall from the sky, and the weather got worse. In the half hour it took me to find the archeological site of ancient Corinth the rain converted into a wall of water. I waited a bit in front of the site, hoping the rain would stop, but no chance. So I had to take off without seeing the ruins and excavations. 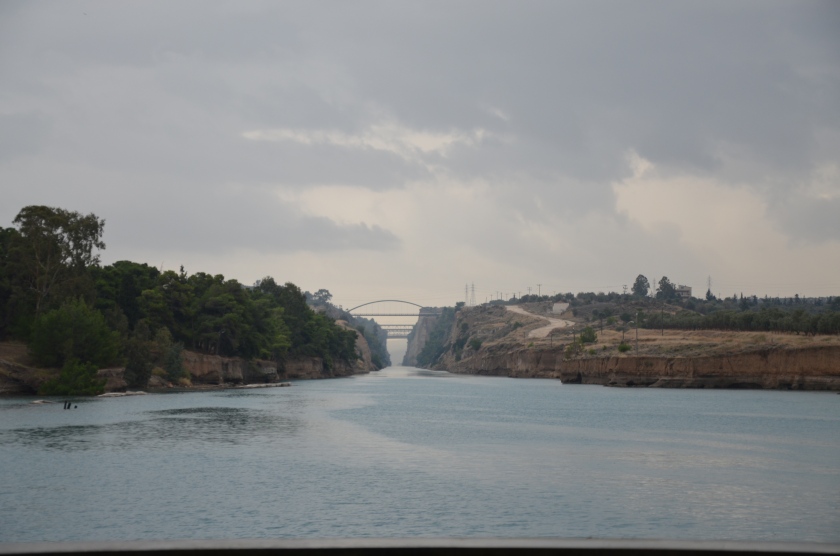 Around an hour later and after a lovely drive through Mediterranean vegetation and endless olive groves, partially along the coast, I reached Epidaurus, the site of the famous theatre. The rain hadn’t stopped, but as I drove up to the parking space lined with cypresses it intensified a lot. I waited again, but now also lightning and thunder came down from the sky repeatedly, the storm seemed to be right over me. Since the weather didn’t change I moved on, a bit sad to not have been able to see two of my long expected cultural highlights in the area. But on the Peloponnese there are archeological sites every couple of km, so I drove on, trying to escape the dark grey clouds, always hoping that the next valley would offer better weather. The only time the weather calmed down a bit was during lunch. In Navplio I drove to the harbor and stopped at a taverna for some tsatsiki, then roasted pork with herbs and fries, a salad and some white wine. 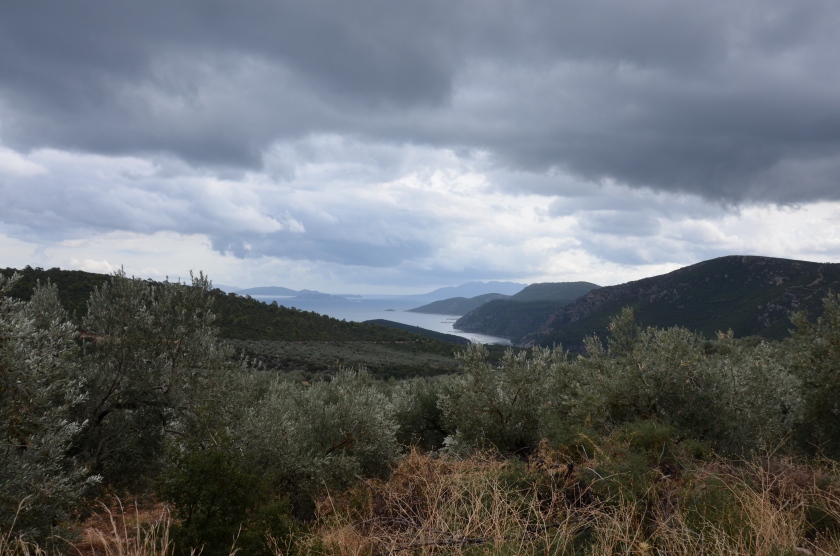 I had no luck in the afternoon either. Over this land full of ancient ruins, where the mythology I read as a child had its origins, I imagined the gods sitting on top of the clouds, observing the small Teutonic explorer in his strange vehicle invading their territory, and fighting over what to do with him. Some of them threw lightnings and thunder, others opened the sky’s waters to wash him away, yet others blew strong winds to throw the car off track or made sudden lakes appear on the roads to wash him away or drown him. But I resisted all their attempts to chase me away and drove to the next site: Sparta. (They did succeed in having me skip Mycenae and Monemvasia though.) Then they got out another powerful trick: they turned off the light. And that killed all attempts to see any place for the day. In the dark I drove through the beautiful mountains from Sparta to Kalamata (home of the delicious olives). The road went up to 1300m altitude and down to sea level again, winding through what in daylight must have been a stunningly beautiful landscape and a true driving pleasure with many curves and tunnels. At 20:00 I reached Pylos on the southern tip of the western coast, where I had a hotel room waiting for me. 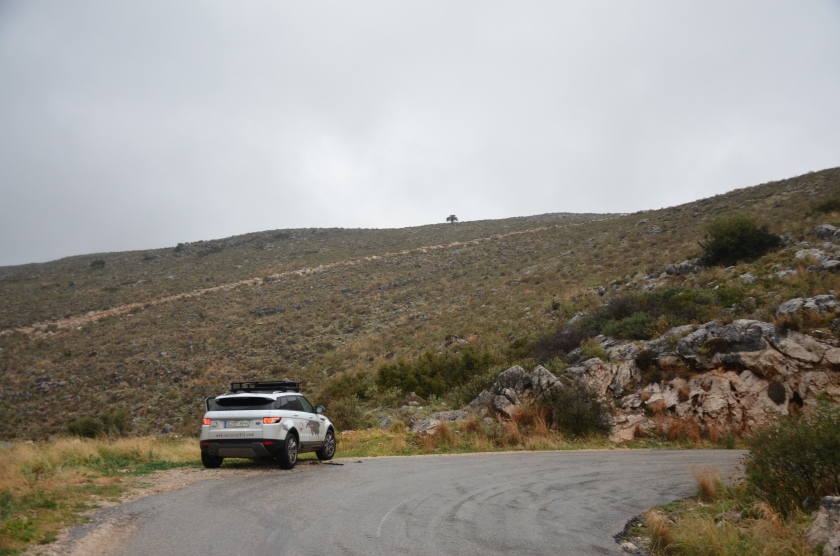 The next morning the first thing I did was looking out of the window and check the weather. I was distracted by the beautiful bay at first, then saw clouds but no rain. After breakfast I tried my chances again and drove to a Venetian kastro in the next village, Methoni, but the moment I reached it, the rain started again. Since it was not too strong, I went to see the fortress, built on the ruins of an even older Byzantine castle, and on a rock on top of the rough sea. The wind almost blew me from the ramparts, and since the rain intensified, I got back into the car and left. A bit further north, on the other end of the bay of Pylos, I briefly left the main road to see an amazing sandy bay I had seen in a magazine on the most beautiful bays in the Mediterranean. I reached the bay, but the rain was quite strong. I got my poncho out, went to the beach (it must indeed be amazing in summer), but there was no way to walk around or take pictures, so I drove on again. I tried my last stop on the Peloponnese: Olympia. I reached it shortly before lunch, but was not in the mood for a long walk in the rain. How much this place had changed in twenty years! I remember a small village with an easily accessible open air archeological site. Here was a tourism town full of hotels, restaurants, souvenir shops, bars, travel agencies, prepped up with a lot of money to polish it up to northern European standards. 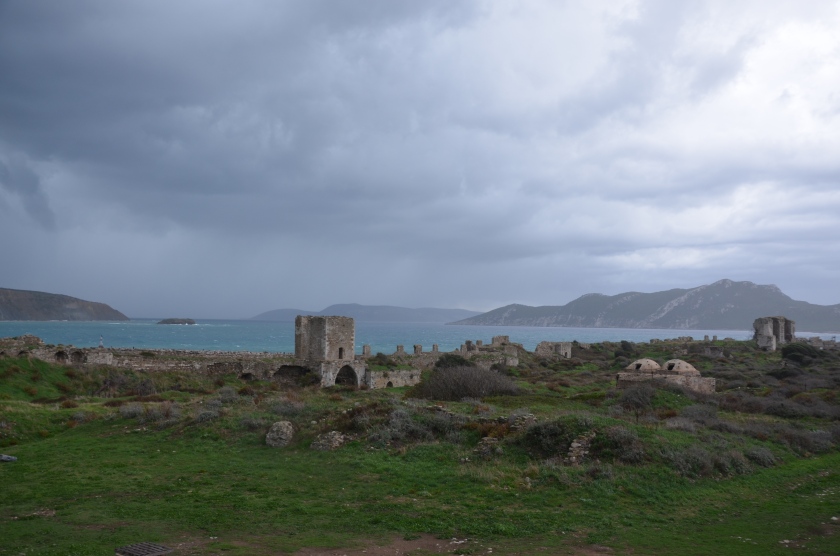 Since I had a ferry to catch and was getting hungry, I left Olympia and drove towards Patras. I had lunch at a small seaside town that was not as beautiful as Navplio the day before. And then had to race to the port, fearing I would be late. I arrived at the port of Patras an hour before departure, checked in, drove to the pier where a handful of cars were waiting for the many trucks to be loaded on the ferry, and then shortly before 17:00 drove the Evoque onto the upper deck. An hour late we took off. Inside the ferry an empty saloon awaited me, with Italian trash TV on all screens (I was truly shocked to see how bad both public and private TV were!), a few people sitting around. There was no WiFi, not even power to charge the iPad. Zero comfort. A great night was waiting for me…