Zanjan (Iran), 17.05.2013
Right at 09:00 we picked up our car at the transit station of the Iranian customs to complete the formalities and go. It wasn’t as easy, since Iran is the first of several countries that require a Carnet de Passage for the car, that we had organized at the RACE (spanish motor club) before leaving. We were presented to Shahin, a very friendly agent that took care of navigating us through the bureaucratic process that took 2,5h overall and shrank our budget by 245 USD in customs fees plus something for the agent. We had eaten a healthy breakfast, very similar to the fare in all countries since Turkey (cheese, tomatoes, cucumbers, honey, egg, bread, tea) plus a sort of ratatouille with egg (also this we had tasted in a similar style on our first camping night in Anatolia). But the lack of coffee really made us dizzy. As we waited for Shahin on a parking space full of trucks, the air filled with dust and diesel, we prepared a Nescafé with too much sugar. END_OF_DOCUMENT_TOKEN_TO_BE_REPLACED

We made it into Iran! And people are great here. But let’s go one by one.
We left Baku way too late. The tyre pick up at the Land Rover service center developed into a 2,5h affair, then we had to cross town twice to pick up a shipment at UPS and get back to the motorway. Before leaving we bought some kebabs and then finally hit the road only at 14:00, a delay with consequences for the day and hopefully not for the next ones. It took us a little less then 5h to the border, after the first hour of motorway the road gets bad, construction and police controls mixed with tractors, busses and trucks do the rest. END_OF_DOCUMENT_TOKEN_TO_BE_REPLACED 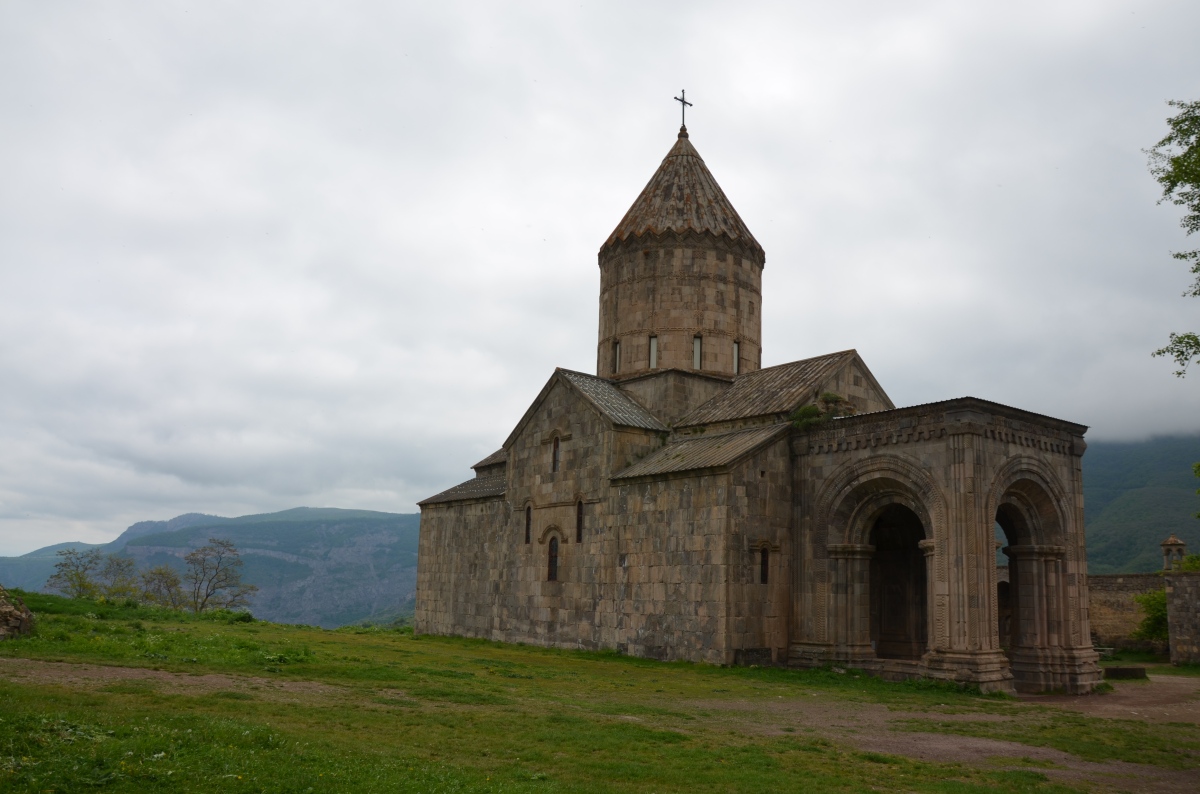 We didn’t publish this post earlier since we feared problems with Azerbaijan (we didn’t have our visas yet and police is rogue, they do what they want). The country is in a difficult situation with Armenia and even more so with Karabakh. END_OF_DOCUMENT_TOKEN_TO_BE_REPLACED

Two days in this city have been a positive surprise, and have shown the Janus face of a country that we got to know from the bad side. The first day we slept mostly to recover from our nightlong drive, but for dinner we explored the new old part of town. From the hotel it was half an hour walking through different styles and epochs of buildings. From the 20th century part of town, that sees new construction along soviet buildings that get a makeover, you reach the 19th century town, that appears to have been restored recently to a beauty and splendor we have rarely seen in these kind of restauration operations. Not even in Eastern Germany, where whole antique city parts were saved from collapse after the reunification in the 90ies streets looked as old and modern alike, buildings as impressive. As the last part we entered the old city gates, walked through stone paved roads, to admire the Maiden Tower, the excavations before it, some caravanserais. It is an amazing old city, and there are relatively few people around. END_OF_DOCUMENT_TOKEN_TO_BE_REPLACED

On the road we’re avoiding potholes, this morning around our camping site we had to do the same but with cow dung. The day started at around 06:00 and we remembered the cows looking at us last night with great astonishment as we occupied their territory. We had a cold shower with water from the river, and it was freeeezing cold and no sunshine yet. Not easy, but two coffees and some exercise (all day long on bumpy roads in a car seat takes a toll on our backs) and by 08:48 we were on the road. The early bird effect is really great, until 10 or 11 the day is different, fewer people are around and we had just more hours to move on. The first hour was all up the mountain, mud track, pothole to pothole. Then we approached Lake Sevan, filled up with diesel and food and continued along the western shore of the lake. END_OF_DOCUMENT_TOKEN_TO_BE_REPLACED

The day starts with a panoramic view over Tbilisi as the sun rises, some clouds – it could be a painting. A quick breakfast on Betsy’s Hotel’s fantastic terrace, and off to GT Motors through the crazy Tbilisi morning traffic. The guys there were super friendly, we fixed the car together in 1,5h and now feel comfortable to survive quite a bit without problems. We just have too much weight on the roof. END_OF_DOCUMENT_TOKEN_TO_BE_REPLACED

Goris (Armenia), 10.05.2013
Before take off, we re-packed the car to put everything inside apart from the spare wheel and tanks. We finally got back to the countryside, passing Ararat driving south. It was late and only a short leg of our route, so we stopped spontaneously at Noravank, Armenia, also to take a break from the pothole slalom. The road to the monastery leads through a beautiful gorge and up a valley with red and green mountains all around. The monastery itself is lovely, well kept, and you can also admire several huge stones with cross carvings.
Since we had not eaten so far we looked for a restaurant, not easy in an area with few people living close to the road. Shortly after Noravank we found an outdoor restaurant with wooden pavilions on a lake, where we had some delicious kebab and salad. END_OF_DOCUMENT_TOKEN_TO_BE_REPLACED 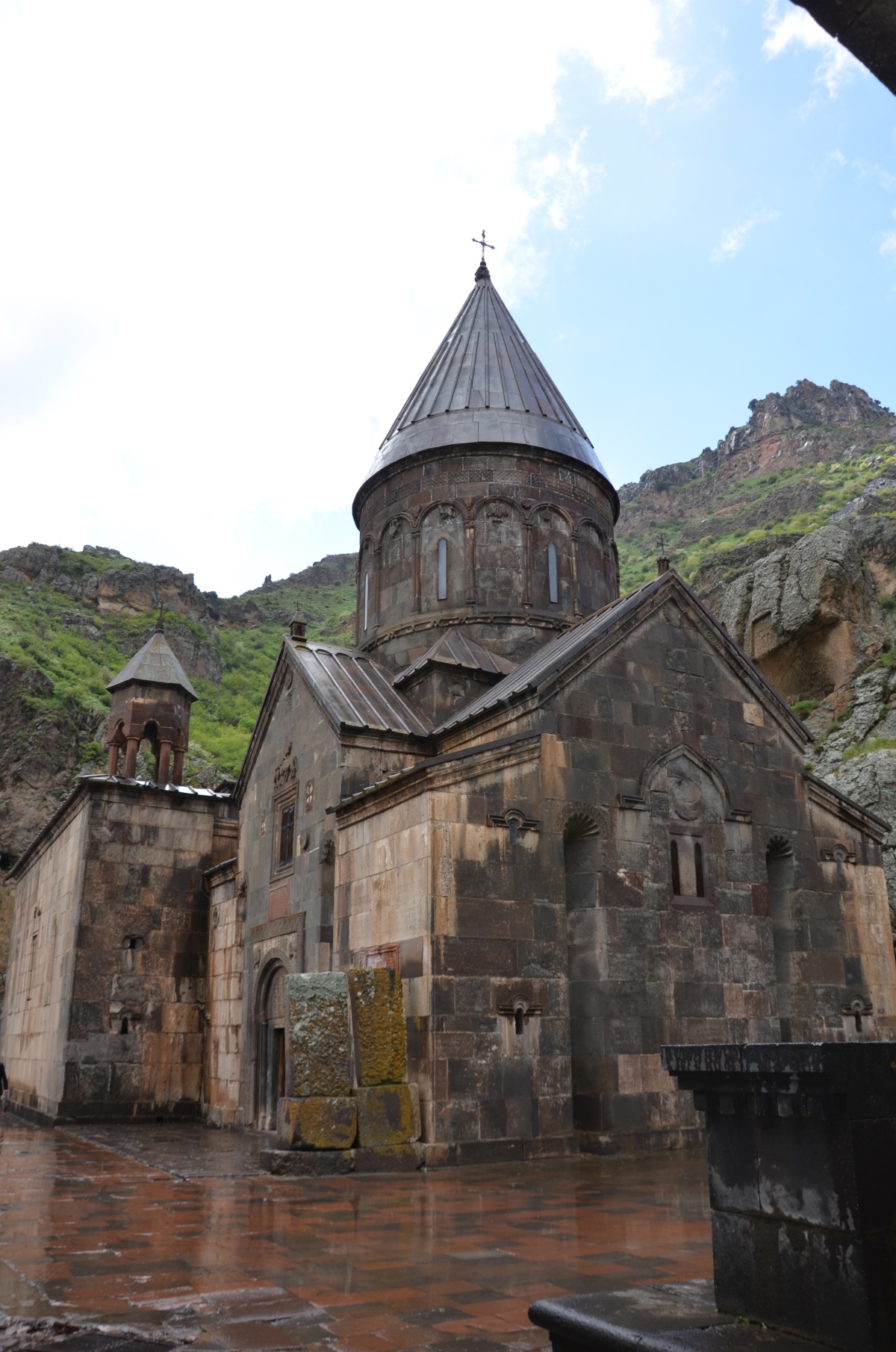 Second day in Armenia, second day in a row with a negative post. This place seems not made for us, and we can’t wait to move on tomorrow.

[Note: this post has been modified from its original version to avoid misunderstandings with readers that don’t know us. See also note at the bottom.] END_OF_DOCUMENT_TOKEN_TO_BE_REPLACED

In 3,5 weeks of traveling today has been the first bad day, from beginning to end. It all started in the hotel in Tbilisi, where we received three bags of laundry that we had to undo, fold and pack into our bags, in the dining room since the hotel had no elevator and carrying all the stuff to the fourth floor only to carry it down again was no option. When we checked out the big surprise came: the agreed rate for two nights doubled! Our first rip off, by the sinister hotel owner, a fat guy with no manners, that started shouting at Helena in Georgian. We packed and were ready to go but the discussion kept going on. Then he wanted to charge us extra for the credit card payment. And then, miracle!, the credit card machine didn’t work and he wanted to take me in his car to some other place to pay. No way, my friend! We picked up some cash, paid and left, with 1h delay. And it was raining. END_OF_DOCUMENT_TOKEN_TO_BE_REPLACED

Honestly we did not have a lot of expectations when we arrived in Tbilisi. After a day crossing soviet-ruined landscapes and not finding food on the road except a leaf of bread (flavoured by hair of the baker…) our mood was very “let’s get things done and then out of here”. But what a surprise this town is! Already yesterday, searching for a hotel, we drove through many parts of the city, new and old, and were surprised to find lovely spots, city life, an old town with bohéme and restored parts. It is orthodox Easter these days, and the hotels we had screened were all full. A friendly girl in one of them helped us find one with a room available, and she also booked us a table in the Shadow of Metheki (“our president’s favourite restaurant”). We went there with no expectations, and a bit scared of the live music. Once inside and eating, the music confirmed all our fears but the delicious food and great wine thrilled us. A strong Chacha (grappa) closed the dinner properly. END_OF_DOCUMENT_TOKEN_TO_BE_REPLACED